What is Bay Ridge? 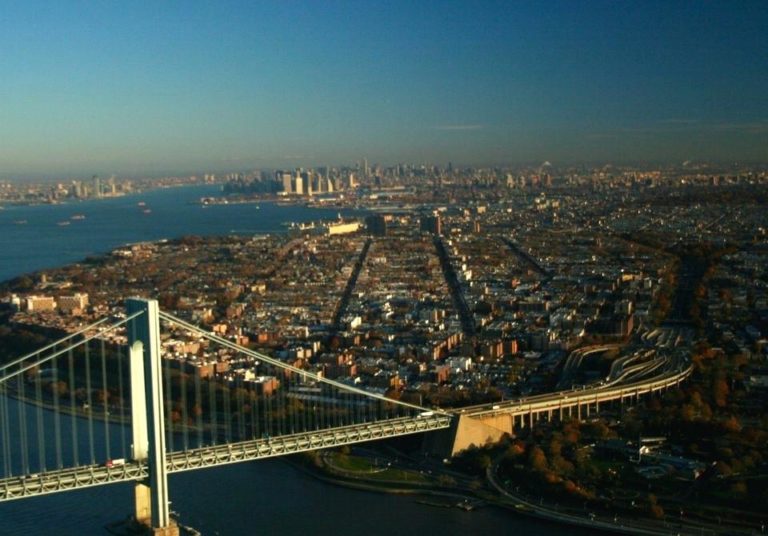 BrooklynRowHouse is located in south Brooklyn, or Brooklyn South for the locals, in an area called Bay Ridge.

For Google Maps fans, here we are. We sit on lower NY harbor on the narrows between Brooklyn and Staten Island, connected by the Verrazano-Narrows Bridge, which was the world’s longest suspension span bridge for about five minutes when it opened in 1964.

One of the coolest things about living in this neighborhood are the big ships, the occasional sea fogs and the lonely foghorns at night, obliterated only by low-flying helicopters from NYPD’s heliport three blocks away. 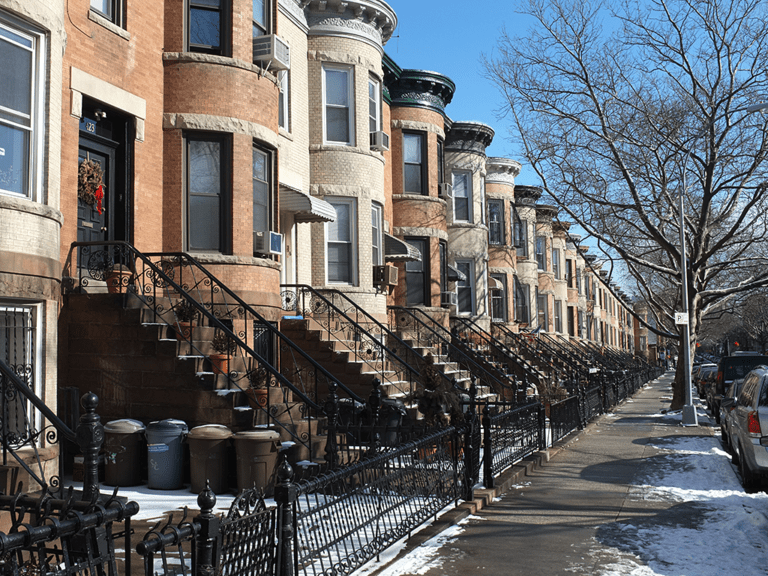 Bay Ridge is a generally quiet, increasingly upscale bedroom community. It’s close enough to Manhattan to be reasonably friendly to daily commuting but far enough away to have it’s own distinct community feel. While we have terrible subway service — only the local R train — we’re one of the few borough communities served by the comparatively plush MTA Express buses which gets me into lower Manhattan in about 12 minutes during rush hour.

We also have new, or rather revived, ferry service from the 69th Street pier to Manhattan and other Brooklyn communities. The trip costs $2.50 and you can’t buy a better view of the city.

Many Ridgers however have no interest at all in Manhattan. I’ve met people who haven’t visited “the city” in a decade or more. Bay Ridge is a pretty self-contained small town.

For one, Bay Ridge offers one of the best restaurant rows in NYC with excellent restaurants like Tanoreen, Little Forno, Chadwick’s, Beets and Carrots, The Pearl Room and Tuscany Grill.  My favorite AYCE sushi place in the city is Bay Ridge Sushi. Suffice to say it also has some of the best pizza in the city, which means the best in the world too. Being predominantly Irish, Italian and Newfie, there’s certainly no shortage of pubs either, from upscale wine bars to neighborhood tap rooms like Three Jolly Pigeons. 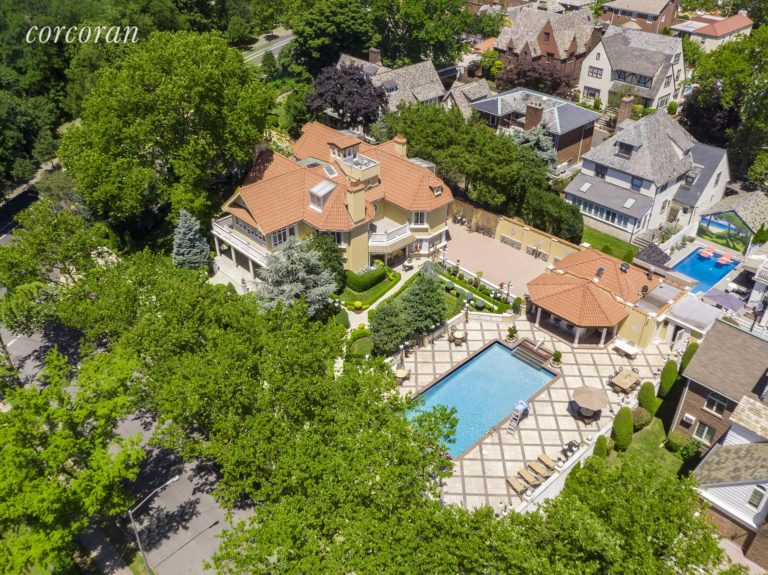 Thanks to the foresight or perhaps just the xenophobia of our pols, Bay Ridge prohibits high rise development.  That helps maintain its relative small town feel and relieves the congestion of putting too many people into too few square feet.

One of Bay Ridge’s landmark homes is the Gingerbread House located on Narrows Avenue. It’s been the subject of many architectural articles because it’s one of the few surviving examples of something one reviewer called “Black Forest Fairy Tale”.

It’s a huge residence on one of the largest private residential lots in Brooklyn and allegedly has its own bowling alley and two-car garage with turntables for the vehicles. It’s been on and off the market for years, the last time listing for $11 million. That’s a steep price but compared to what $11M will get you in Manhattan these days, a bargain.

While this video is a gushing 1949 travelogue about Brooklyn, near the end of it are pieces about the Belt Parkway, Shore Road and Fort Hamilton, which are all in Bay Ridge.

However one can’t help but laugh at the over-the-top hyperbole in this narration.

By the way, 70 years later, the “soon to be retired elevated railroad” is still in operation on several lines. 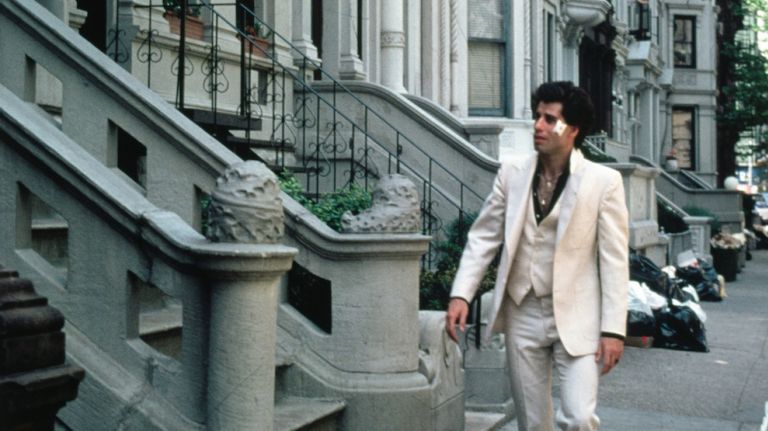 Up until the Millennium,  Bay Ridge was known mainly as a blue collar bedroom community of cops, firefighters, empty nesters and young families with first homes. Because so many emergency workers lived in Bay Ridge it was devastated by 9/11. In the months following that tragedy it was almost impossible to walk two blocks in any direction without encountering a memorial to a loved one killed in the WTC attack.

Pop culturally, Bay Ridge was immortalized as a middle class neighborhood in the 1977 disco movie Saturday Night Fever. The disco portrayed in the movie, 2001 Odyssey, actually existed on 64th Street. The club never survived to see 2001. It and it’s famous lighted dance floor closed in 1995, was torn down and is now a Chinese commercial building. The movie was mostly filmed on location. It’s cool seeing what my neighborhood looked like forty years ago. Aside from an influx of well-paid newbies fixing up their homes, it thankfully hasn’t changed all that much… at least by comparison to neighborhoods in Manhattan.

Bay Ridge has, or at least had, a less than flattering designation as a NORC: a Naturally Occurring Retirement Community. When I moved here in 1999, the median age was 50. Now it’s 37. 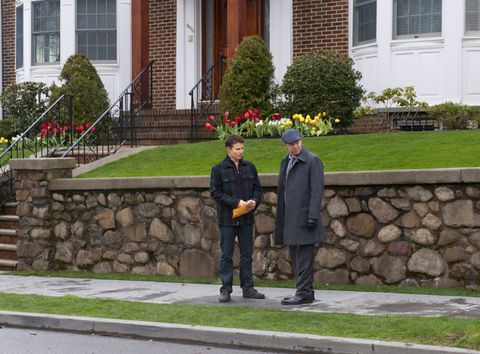 A lot of Hollywood movies and TV are filmed in Bay Ridge, to the consternation of the locals who don’t appreciate giving up several blocks of street parking to location shoots, sometimes for days.

Among the location shoots filmed in Bay Ridge are St. Vincent, The Lords of Flatbush, What Happens In Vegas, Bullets Over Broadway, Run All Night, Cop Out, The Narrows, White Irish Drinkers and the TV series Fringe.  The Many Saints of Newark, a Sopranos prequel with Ray Liotta and Michael Gandolfini, is filming in Bay Ridge now.

Woody Allen was spotted several times recently at the Pearl Room, his breakfast hang while he was shooting in the neighborhood.

One of the more recent productions is the TV show, Blue Bloods. The house that supposedly belongs to Police Commissioner Frank Reagan (Tom Selleck), and where every episode ends with a family Sunday dinner, actually exists on 82nd Street in Bay Ridge, not far from Brooklyn Row House. 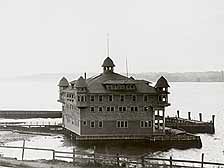 Forgotten New York has some great thumbnail pictorial history of Bay Ridge. I’ve gotta smile when I think that my house was probably under construction at the time this photo was shot of the long gone Crescent Boat House.

While much of Bay Ridge is “old Bay Ridge” — and by that I mean that there are lots of Bay Ridgers here who can trace their lineages back to a great grandparent who also lived here — the area has come under assault from late-comers like me: wannabe homeowners who were priced out of Manhattan, Brooklyn Heights and Park Slope real estate. Even in the short few years that I’ve been here I’ve seen real estate values triple and more. In fact, according to the latest Zillow Z-Estimate, my house is worth almost 5 times what I paid for it in 1999.

Ethnically, Bay Ridge has an unusual diversity. It’s a small enclave of disappearing old-school Republican conservatism in one of America’s most liberal cities, which also means that it’s conspicuously caucasian for NYC. At the same time it’s one of the most diverse neighborhoods in the city, most recently with a heavy influx of middle class Arabs, Asians and Russians. South Bay Ridge is traditionally “Italian Bay Ridge” while my neighborhood was known as “Irish Bay Ridge”. In fact, my neighborhood’s history is as much Norwegian and Newfie as anything else. Norwegian Day is a huge event in Owl’s Head Park. 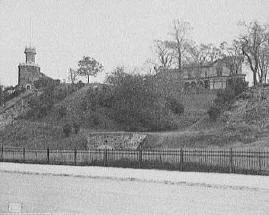 This is the Eliphalant Williams Bliss mansion circa 1906, the same year my house was built. His huge estate became Owl’s Head Park. But only us newbies who didn’t live here in the 1970s call it Owl’s Head. Old timers still call it Bliss Park.

Bliss was a former machinist who built the EW Bliss company and profited heavily in the munitions industry during the 19th century. Bliss is credited with inventing the torpedo. The base in front of the mansion (which was razed in the 1930s) is the home of the Owls Head dog run today. There was allegedly an underground tunnel leading from the top of the hill to the water. Bliss was supposedly a Confederate sympathizer who needed a quick escape route. 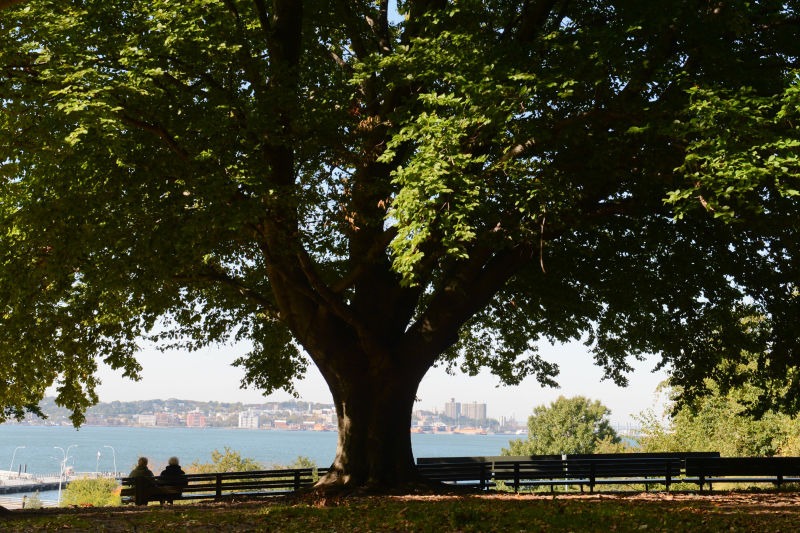 Speaking of parks, Bay Ridge allegedly has the most square feet of park land per capita of any neighborhood in the city.

Anyway, this is the view from my park at the end of the block. That’s Staten Island across the harbor. You can just barely see the orange Staten Island ferry at the St. George Terminal.

There are two shafts that were dug in the 1920s to begin the very political and never-built Bay Ridge-Staten Island Tunnel. I’ve found one of them. 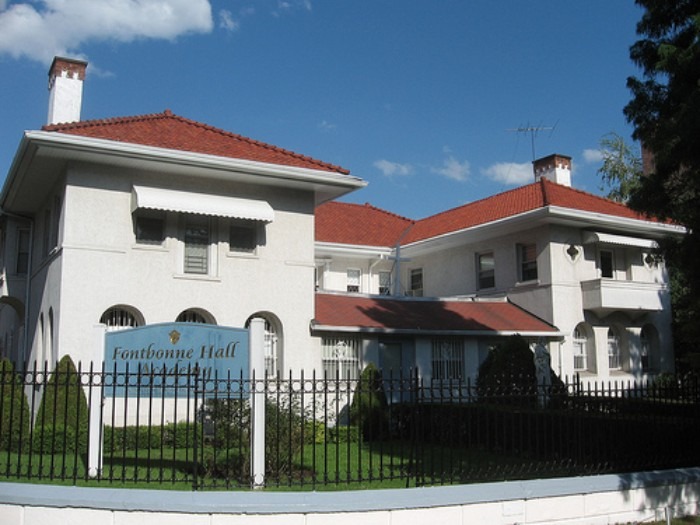 No neighborhood history is complete without dropping the names of some famous residents. Silent film star, Clara Bow, was born here. The actress, Lillian Russell, used to live here in a house bought for her by Diamond Jim Brady. It’s now a Catholic girl’s school, Fontbanne Academy. Both Robert E. Lee and Stonewall Jackson had houses here, back when they were stationed together at Fort Hamilton, which is still an active albeit small Army base in Bay Ridge.

More currently, the actress, Marisa Tomei, is from here, or rather just next door in Dyker Heights. She didn’t develop her accent in My Cousin Vinnie in a vacuum. It’s classic south Brooklyn princess along with that in-your-face sarcasm. Two of the cast of The Sopranos are from around here too: Steven Schirippa (“Bobby Bacala”) and Tony Sirico (“Paulie Walnuts”). I’ve seen Sirico in the local delis. Another Sopranos cast member, Joseph R. Gannascoli (“Vito Spatafore”) used to own a restaurant a few blocks from here, Soup As Art.

Bay Ridge is the first neighborhood that NYC Marathon runners see after the starting gun on the Staten Island side of the Verrazano Bridge and one of the last American neighborhoods you’ll see as you sail out of New York Harbor.