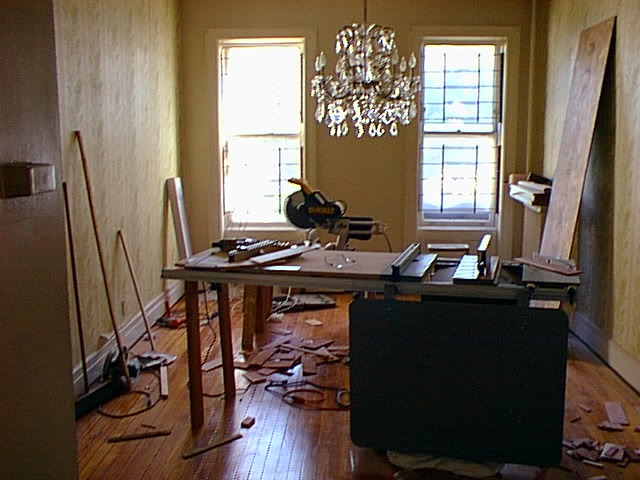 “I’ve always wanted to own an old house!”

The popularity of home improvement shows demonstrates that people are fascinated by the idea of taking something old and beat up and making it new again. But as anyone who has undertaken a large scale home renovation knows, the reality of doing it yourself lives on another planet from the romantic, everything-works-the-first-time impression that these shows portray.

For one, you won’t have a professional contractor standing out of the shot, ready to yell “Stop! Stop!!” before you slice through a BX cable with your demolition saw. Nor will you have a bunch of off-camera laborers to unload the truck, clean up the mess, lift bags of cement, dig holes, chop up concrete, strip plaster, haul debris and all of those other tasks that seem to take care of themselves on TV. These shows do a great job of introducing viewers to the details of home renovation. But never forget that Bob Vila goes back to the Ramada Inn for a nice dinner and a hot shower at the end of the day. You might not have a functioning kitchen, or even water.

Despite the best of intentions, the FHA says that most owner renovations fail. Besides requiring a lot of energy and knowledge of the skills and materials needed to see a house renovation project through to the end, let alone to do them right, it takes more patience and attention to detail than most people can spare. In other words, it requires pretty much the same qualities that you would look for in a general contractor. And it explains why we have building codes.

This is a shot of my dining room. For two years. If that doesn’t bother you, read on, brother.

People who undertake a home renovation are a different breed from those who purchase move-in condition homes. They want a project. They want a house they can feel a part of, not just a shell for their furniture. The breed breaks down further to those who call a general contractor and those willing to walk the fire. For those of you in the former group, read no further. Contact an architect, find a reliable general contractor and continue paying rent until it’s finished. You’re probably smarter than the other group, but remember to bring money and lots of it. The average contractor gut rehab on my block runs in excess of a quarter-million bucks, which is more than than I paid for my house! That’s just basic rehab, no fancy hardwood, Viking stoves, wine cellars or even landscaping. “Golden Nail” renos can be double that, or more.

If you have the money to hire a general contractor, do it. In the long run, you’ll get most of the same satisfaction and, providing you use a reputable, experienced GC, you’ll also know that the job was done right. You just won’t have the same bragging rights as those who did it themselves. On the other hand, you also won’t know where all the mistakes you made are either.

The downside? Expect to pay as much as 5 times what it would cost to do the job yourself. Hey, do the math! A skilled tradesman earns anywhere from $150 to $400 per day and you’ll need several trades along with their helpers. Add to that the general contractor’s fee, which can be up to 25%. Depending on house prices in your neighborhood and where the housing market is when you sell, the bill may push your investment far above recoup at sale time.

By the way, don’t attempt to play house flipper with renovation projects unless you really know what you’re doing. Most home improvements won’t add that much value to your home. Even experienced GCs get burned doing that. Some improvements may even cost you at sale time, especially if you failed to get the necessary permits (and the seller’s attorney finds out).

Still want to do it yourself? Here’s some stuff to ask yourself first, and be honest.
Is your spouse as nuts are you are?
Are your kids old enough to swing a hammer or just old enough to turn on the table saw when you’re not looking?
Can you invest several hours a day in your project, as well as all your weekends and holidays for three or four or more years?
Are you bothered by nuisances like a bed full of plaster dust, slaloming around ladders to get to your morning coffee, tripping over extension cords in the dark, eating take-out for months and occasionally bathing in the sink?
Are you ready to give up all your precious, time-consuming hobbies?
Have you ever done construction before and do you like reading how-to books, especially stuff as dry as building codes?

If not, do yourself a favor… don’t do it. I don’t have kids but just the addition of two large, energetic puppies to the household was enough to interfere with my renovation plans.

Keep this in mind too. Do-it-yourself home renovations are long-running ordeals and you probably have a job and at least some non-disposable social life to attend to. A project that might take a contractor with an experienced crew two weeks to complete might take you six months of weekends and evenings, no matter how good you are. For example, look at my living and dining room pages. The woodworking there alone took me 16 months!

Even if you decide to do the work, pick your battles. Norm Abrams, the demigod of home improvement, wrote that he spent years getting through all the finish work on his own house. Even he knew when to call for outside help.

Remember that building codes only specify minimum standards. If local codes dictate that licensed contractors do certain work like electrical or plumbing, obey! To do otherwise could liable you for fines, difficulty in selling your home, and possibly even denial of insurance coverage should things go terribly wrong. In these boom building times, you can always find licensed independents willing to work with you as an advisor while you do most of the actual work. Beware, however. They can be harder taskmasters than municipal building inspectors because their reputations are on the line.

Finally, for those who decide to call the general contractor, you’re still not out of the woods yet. Always… always… check a GC’s references, papers and insurance. Never… ever... hire an unlicensed GC. To emphasize that point, here’s a sad story which happened on my own block:

A 70 year-old woman asked her daughter to move in to care for her. She decided to provide her with a basement apartment and a convenient street level private entrance. She called a contractor who had stuck a card in her mailbox. The contractor, who was unlicensed and incompetent, told her that she didn’t need a building permit for the job. Being unlicensed, he couldn’t have gotten her one anyway, which of course is why he told her that. A couple of weeks after the work started, with her front yard completely gutted and old gas and electrical pipes exposed, a Buildings Dept inspector shut her down with a heavy fine and a stop-work order. The contractor skipped with her five-figure deposit. Her neighbor sued her for $12,000 in damage to his front stoop, which began collapsing because of the careless excavation. She had to hire a lawyer. Then she had to start over with an architect and another GC (licensed). In the end, she spent over twice what she would have had she just checked her first first GC’s paperwork and references.