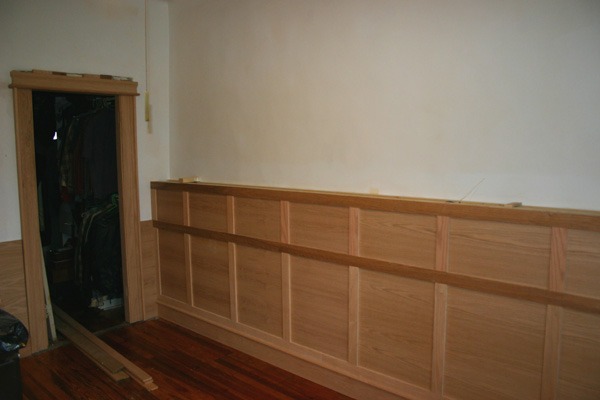 A few days ago, Jeannie from House In Progress referred a woman from a new ABC reality show to me. From the email it sounded like she was looking for folks who had gone way over their heads on a home improvement project and needed 911 from the professionals to bail them out.

I told her that this was my fourth major construction project in 25 years and that I wasn’t (*harumph*) a rookie at this stuff. I politely declined. But the next day I wondered if I wasn’t exactly the sort of Al Bundy cartoon character she wanted. After all, I was three weeks behind where I wanted to be on the master bedroom renovation. That’s a Bundy point right there: unrealistic expectations.

Last Friday started with me hunting for 80 feet of crown moulding in the pile of red oak that Dykes Lumber had delivered two months ago. It was missing! At $8/lf, I was pretty pissed about it. I contacted Dykes and reamed the dispatcher, who told me he’d get back to me when he found the receipt. I wish I’d found my own copy before I opened my big mouth. I had forgotten to order it. Three Bundy points for carelessness, confusion and misplaced anger.

After eating a large breakfast of crow with Dykes, I started answering messages on my blog, including one from CP Day at Day’s Shore House. Like me, he’s a home automation tyromaniac and was interested in the troubles I was having with the bedroom Insteon lighting controller, or what I had come to call my expensive blue night light. We traded some messages back and forth. Since I was looking for an excuse not to start cleaning up the shop, I decided to investigate this problem instead.

Through a process of elimination I found the source of the trouble. I have a dedicated powerline LAN for my living room TV which broadcasts to my office computer via a Slingbox. I stopped using the Slingbox last spring when an upgrade trashed its operating system and I got stuck in IVR/email hell with Sling’s crack team of tech support autoresponders.

Their SlingLink powerline LAN generates an incredible amount of RF noise, enough to interfere with wireless Insteon devices on the same circuit. When I unplugged the SlingLink, my Insteon stuff started working again. Huzzah! But another Bundy point for wasting months of electricity on my LAN To Nowhere.

Despite my screwing around this week, renewing a contract with a client, starting a new project for another one and building a Drupal site for our local dog run, I actually managed to get some work done on the bedroom.

I probably spent as much time in my calculator as I did building these panels. And I still got it wrong. The leftmost panel is two inches narrower than the others. Since that panel will live behind a door I’m not going to lose any sleep over it. Nevertheless… *ding*… another Bundy point.

My intent was to dress up each of those panels with 1-1/2″ ogee cap mouldings but now I’m not so sure. Most of the room will have a shorter version of this wainscotting and a more elaborate panel might be, you know, a little overwhelming. Like waking up in a court room. Perhaps this simpler Shaker/Prairie School approach would look better. It’s all going to be stained a saddle brown. What do you think?

And this is all the crap I had to move out of the way to take that shot above.

No matter how large a space I’m working on, it’s only a matter of time before the room becomes Super Mario Bros. If I was renovating Grand Central Station I would make it unnavigable within a month. How unnavigable? Well, one of my otherwise well-behaved cats expressed her displeasure with not being able to get to her litter pan by pissing in my brad nailer case last night.