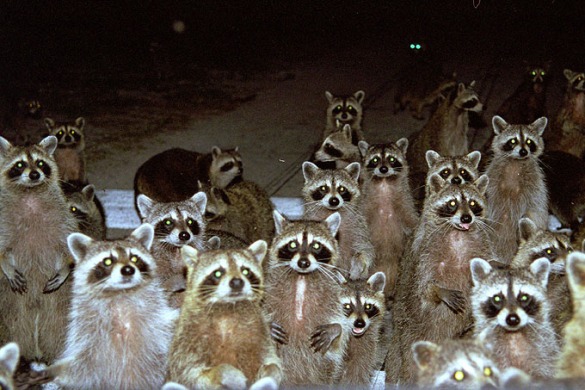 No, I’m not talking about the street scene around here. I mean actual wildlife living in the shadow of downtown Manhattan. Rural folks are surprised to hear that we have something other than rats and pigeons here. But it’s a fact. 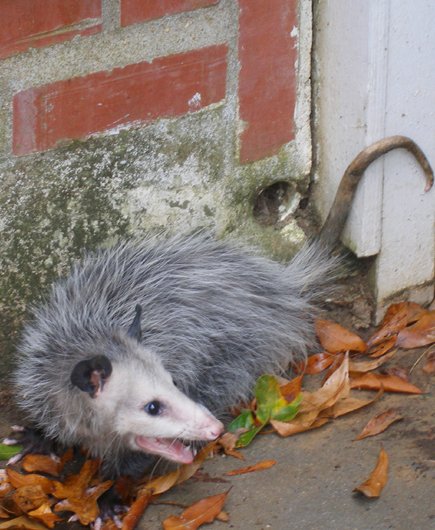 I was walking Jack and Augie last night around 1am when Augie spotted something in my neighbor’s garden. He charged. I heard a hiss and caught a flash of white fur as something flew up a large bush. A cat? Then I saw the skinny tail and the lethal-looking teeth. It was a possum.

I wasn’t that surprised because I know that they exist here. Karen rescued one on Christmas Eve of ’04. We took it to the Christmas party with us that night because there was an emergency vet specializing in wildlife rescues on the way out to her sister’s place on Long Island. Karen adopted it, gave it a name (Lorilei) and took it for walks with her dogs.

There’s a whole colony of possums living on the Dyker Heights golf course about a mile from here.

What else do we have here? Raccoons! Big suckers too. Shortly after moving here I was cutting my back lawn when I stepped in a pile of poop that was too large for a cat. The fence pretty much ruled out a dog. And it was horrible smelling, worse than a dog’s, leastwise a healthy one.

A few evenings later, I heard a rustling on my deck, looked outside and saw what at first looked like a very large, very fat cat. However I didn’t spend my entire life in the city. I knew it was a raccoon.

Over the next few weeks I saw it a few more times, even scurrying across a busy avenue. I’m told Animal Control caught it and relocated it upstate. Too bad. Maybe it could have taught a couple of my careless neighbors to cover their garbage cans.

But I’ve seen a few more since then. One was in the dog run last year.

What else? Hawks! I see a huge one almost every morning in the park down the block when I walk the dogs. I always know the hawk is around when I don’t see any squirrels and the crows and seagulls are making an angry racket. If you look for the anxious crows you’ll spot the hawk.

Big deal. These animals are commonplace in the suburbs. But we have something that most ‘burbs don’t. Parrots! And I mean lots of them. 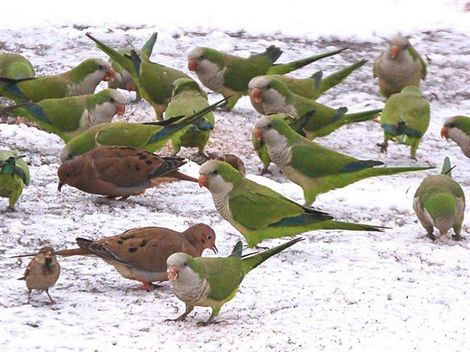 This is a shot of actual wild Brooklyn parrots (four of them named Vinnie). The predominant breed is urban monk parrot but I’ve seen cockatoos, cockatiels and African greys, the latter probably dumped by owners who didn’t know what a lease-breaking racket they can make.

Scattered all over southeast Brooklyn are parrot colonies with as many as 60 birds. They drive Con Ed nuts because they build their communal nests around the warmth of electrical transformers on telephone poles, and they fiercely defend them.

There’s even a website about our parrot denizens: www.brooklynparrots.com.

The story is that a crate of parrots was dropped at JFK Airport in the 1960s and they established a colony nearby. Since then, they’ve moved east and west and have even taken root in nearby New Jersey.

But as far as I know, there really aren’t any alligators living in our sewers. That’s urban legend, grasshopper.