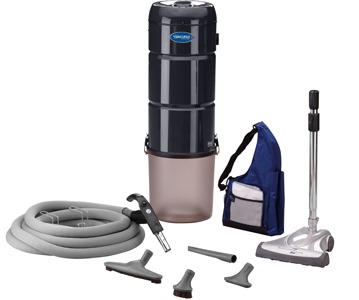 I resisted the urge to title this article something stupid like, “This really sucks”.

I’m often asked what’s my favorite power tool in the house. It’s not my Delta table saw nor my router table. It’s my central vacuum. In terms of pure usefulness, my central vac has done more work on the house and saved me more time here than even my cordless drills. And without a single breakdown.

I remember when my gadget freak of an uncle installed one in his home when I was a little kid. I was always fascinated by it. I pestered my folks to get one but I think my dad envisioned his weekends being spent cleaning marbles and cat food out of the pipes. Shortly after I got this place and opened up the walls I began researching central vacuum options. I settled on the Vacuflo. It’s proved to be rock-solid reliable for the eight years I’ve had it, and I’ve put it through more punishment than its designers ever intended.

Besides keeping my house clean, which believe me is no small feat with very active, long-haired animals and a permanent cloud of sawdust floating in the air, the Vacuflo also functions as the dust collector in my shop. On a typical shop day it consumes as much as ten gallons of sawdust and wood splinters from my table saw, router table, planer and sanders. After I told the local Vacuflo rep about my plan, he was so interested in learning if it would actually work that he sent me some spare hoses and couplings to jury rig connections to my tools. It works quite well too. 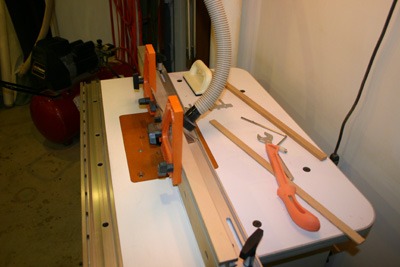 It doesn’t have the CFM (cubic feet of air/minute) of a professional dust collection system but it also doesn’t occupy several square feet of valuable shop floor space either nor does it scream like an air raid siren. It’s also never clogged on me, as the wanker purists on rec.woodworking told me it surely would. Central vac ports are designed to catch things before they get wedged in a pipe inside the wall.

Installation was actually pretty simple, taking just two days to complete. Of course, it meant knocking some holes in the walls but since the walls were coming out anyway that was a small matter. 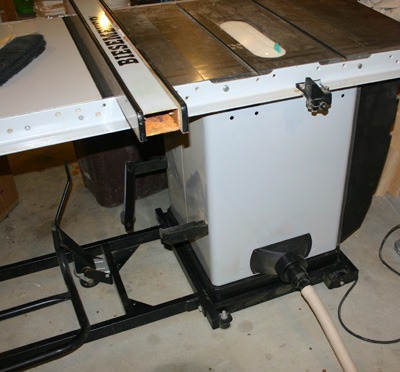 Basically, it’s a lot like gluing together PVC plumbing. Unlike rigid PVC, central vac pipe is thin-wall and has a little flex to it, which lets it bend around small obstructions. It’s also a lot lighter. So long as you know which way gravity is pulling, it’s just application of common sense: keep your runs as straight as possible, don’t make the vac have to suck anything “up”, keep your T-Y’s pointing towards the power unit.

The job is less daunting when you realize that most floors will probably only need one outlet. A 30 foot vacuum hose covers a lot of area. If you remember Geometry 101 and the formula for determining the area of a circle, Pi*r*r, a 30 foot hose can cover up to 2800 square feet. Of course, with walls and obstructions it’s not as simple as that. Nevertheless, my floors are 1000s/f and I only need one port on each floor and there’s still enough play in the hose to vacuum my back deck, front stoop and porch. It even reaches into the garage so I can vacuum it and the car.

Another major advantage of a central vac, or at least the cyclonic action power units like Vacuflo’s, is that the real fine dust that people buy expensive HEPA portable vacs for isn’t an issue. The powdery dust all gets blown outdoors. Anything bigger than a fine dust particle gets caught in the unit’s large bucket, which probably won’t need emptying for months (unless you live in my house). 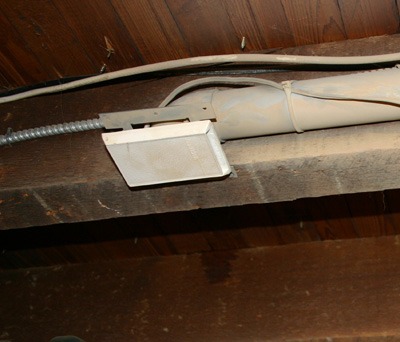 In the interest of fair disclosure, that leads to a central vac’s only negative. If you were to vacuum up a pound of dry flour, your back yard might wind up looking like the set from “The Polar Express”. After ripping down some old plaster here, I used the vac to suck up 100+ years of fine, gray spooge that had settled on the window headers. When I looked out the window, I thought I had a basement fire. The billowing gray dust cloud freaked me out. But this is a very unusual situation. Most people wouldn’t be as careless as me.

Well, one more negative. That outside exhaust port can be noisy, sounding a bit like a small jet engine. I helped my neighbor three houses away install the same vac in his house and I always know when his house cleaner is working.

You probably don’t want to be doing any midnight spring cleaning.