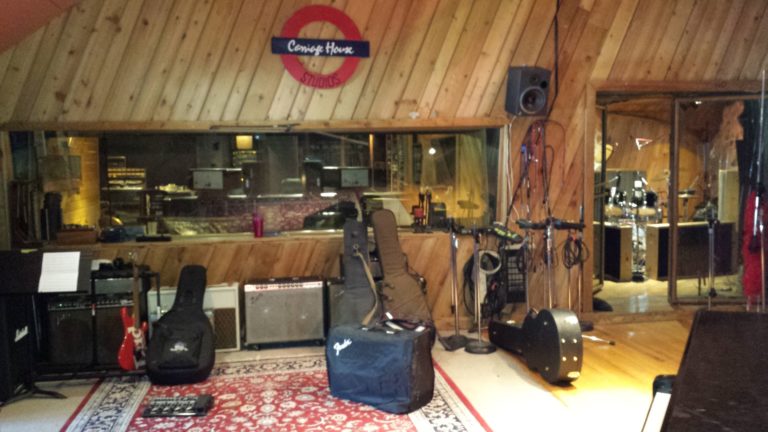 Have you tried acoustic tile? (Hint: not a solution!)

After the 500th time reading someone complain about the clomping feet of the tenants upstairs, and the 1000th response from a helpful someone advising them to install acoustic tile, I have to post something that will maybe get Googled for the next poor person who asks about it: acoustic tile is not a solution. I don’t have an architectural acoustics degree but this is something I learned in the trenches, building commercial recording studios and reading books by studio designers and acousticians like Michael Rettinger and Don Davis.

There are two basic types of noise control: one that alters the acoustics inside a room (i.e. absorption) and one that contains that noise and keeps it from invading neighboring spaces (transmission). The respective technical approaches are about as similar as frying a hamburger and paper training a puppy. In other words, different.

Acoustic tile is an absorptive treatment. It reduces the reverberation time of sound within a room by absorbing airborne sound at X ranges of frequencies. It does not treat structurally transmitted noise like footsteps. That’s actually vibration, not sound per se.

“But I see it used in expensive hotels and I never hear someone walking around in the room above me.” Answer: because what you don’t see is the eight inches of concrete under that tile nor the thick carpet and padding on the floor above. Hotel builders know what they’re doing. That acoustic tile is there to make the room feel cozier. That’s all. The carpet actually does a better job of it too.

This brings up another fact about sound transmission. There’s airborne noise and there’s structurally borne noise. Airborne noise is like standing outside your neighbor’s front door and yelling, “Hey Joey! Get your car outta my driveway!” Structurally borne house is banging on his door with your fist. A doorbell is a sorta hybrid of the two.

Air is a pretty poor conductor of sound. Sound likes density as a medium — like the water around a sonar head, or the the wood joists in your ceiling. It’s a bit more complicated than that but that’s the answer to why acoustic tile doesn’t work in this application. Acoustic tile works on airborne noise. Your neighbors upstairs sound like a team of Clydesdales because they’re creating structurally borne noise.

So how do you fix it? 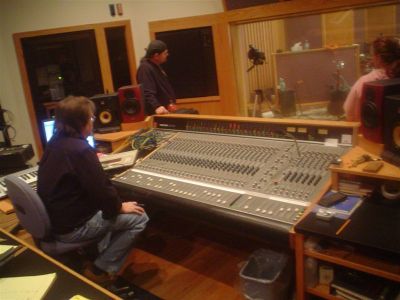 The easiest solution is to buy your neighbors thick, fuzzy slippers. Or a plush hotel carpet. That may sound snarky but those really are your practical options. Beyond that, it gets complicated.

The next level up in sophistication is architects design recording studios. You won’t notice it by looking at it but each room is a floating box within a box, usually with a pair of heavy doors called a sound lock. There’s no structurally born noise between these two shells because the inside box is built on top of a grid of neoprene vibration absorbers, specially selected for a weight range. These burn out structural energy mechanically before the vibration gets to the shell around it.

So how does that work? If you remember your Physics 101, entropy means energy loss. What these isolators do is force sound energy to convert to mechanical energy. Airborne noise hits a rigid floor and turns into mechanical energy. That sound will travel through anything which is also rigidly attached to the floor, gradually diminishing from resistance in the medium. But with a floating floor, the energy can’t move beyond those isolators. Instead, it burns itself out trying to move a floor weighing several tons. That sucks up energy like throwing a rock into a pond.

Anything that is mechanically connected to those two walls is a potential short circuit: a water pipe, an A/C duct, even a badly placed screw. In studio design, everything is mechanically isolated, even the fire sprinklers. 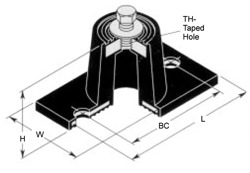 This is a vibration isolator commonly used to decouple a floating floor from the outer shell.

Back to our residential example, it’s the old “shin bone connected to the leg bone” thing. The flooring upstairs attaches to the joists, which attach to vertical supports running adjacent to your space, to which your walls are attached. So even if you could physically isolate your ceiling from the floor upstairs, you’re still going to hear that banging noise in your walls. And your own floors for that matter.

The point is, attenuating structurally born noise is challenging and potentially very expensive. For the most part, it has to be built into the structure itself and the noise has to be contained at or near the source. It’s not something you can glue to the ceiling. And even then, it’s not always 100%. You could fire a gun in the studio and barely hear it in the control room. But the R train under my old studio used to occasionally create subsonic rumble through the building’s skeleton that only the large diaphragm mics could hear. We could never get a handle on that and it sadly cost us a lot of easy but lucrative voice-over work. But the punk rockers loved us so it almost didn’t matter .