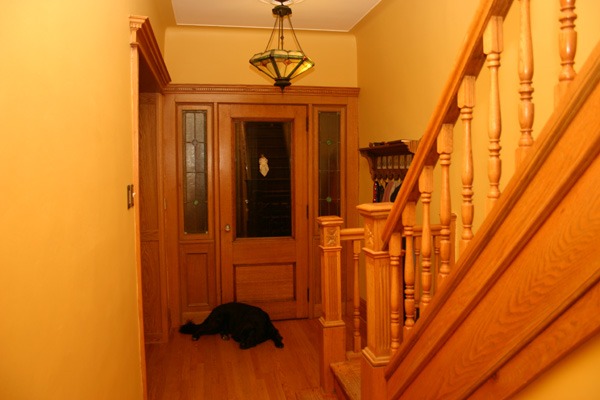 In 5 years I’ll make another plan

Want to know how out of shape you are? Paint your house. Between squatting down to cut in baseboards and torquing your body into dramatic poses while standing at the top of a ladder with a roller, you’ll find out. Do it for several days and you’ll have lactic acid boiling in muscles you didn’t even know you had. 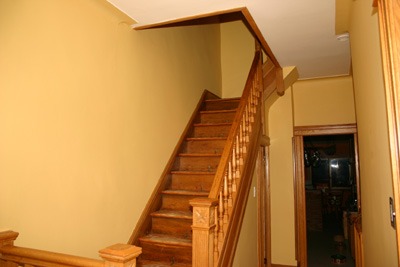 The colors here are a little off because of the flash but, believe me, it looks nice.

Because of my job I had to break the painting marathon of my mudroom, first floor hall, stairway and second floor hall into several evening sessions ending as late as 2:30 in the morning. It concluded this weekend.

I really and truly hate painting. Sure, it takes some technique but on my scale of interesting home renovation tasks, where building a cool hardwood cabinet is a ’10’ and cleaning up 300 pounds of plaster rubble that the cat peed on is a ‘1’, painting is maybe a ‘3’… just slightly edging out it’s close cousin, stripping paint (a ‘2.5’).

It wasn’t all pain and tedium though. I learned that XM’s Deep Tracks channel saves its best music for after midnight. I was grooving so much to a Joe Bonamassa live track that I dropped the paint can while cutting in around the ceiling. To add to my troubles, as I started to climb down off the ladder the clock struck 2am. That’s when I programmed my Insteon home automation controller to do a safety kill of every light in the house. The only music that seemed appropriate at that point was the Looney Tunes theme. 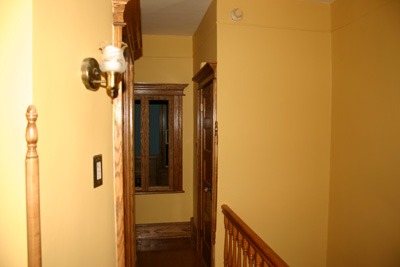 At least the color was right, which I can’t say for my kitchen which is on its fourth pallette. It’s exactly what I expected from Benjamin Moore’s online Color Viewer. It’s called “Beverly Hills” and I got it in a matte finish. I hope that a low luster finish wasn’t a mistake for a stairway wall but I didn’t want a tall, glossy wall in the stairwell. The color, which is actually pretty close to historic ocre, blends well with both the natural oak trim on the first floor and the stained oak on the second as well as the green and red paints in the living and dining rooms.

The only problem with the color is that I have daylight CFLs inside a yellow stained glass hanging lamp. Yellow on yellow kinda makes you feel like you’ve got jaundice. Well, I’ve been looking for an excuse to replace that hallway light. 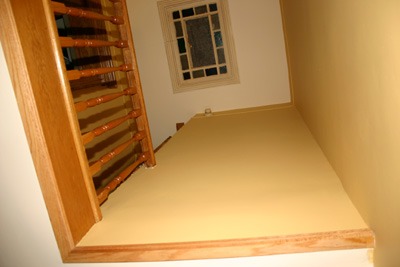 My nemesis on this project was this stairwell. It’s sixteen feet from the steps to that (soon to be replaced) skylight. I may have a shop full of some bizarre tools but one thing I lack is a ladder that expands this tall. I had to borrow a very heavy, articulating ladder from a neighbor. It was like unfolding a 70 pound Swiss Army knife. Sorry, gimme a plain ol’ telescopic ladder any day.

With all the fresh paint, the walls suddenly look very naked. I don’t have many wall decorations but my intent is to fill them up with old Brooklyn photos. To that end, I’ve already acquired a half dozen great old photos from sites like Shorpy and the NY Public Library. I just need to get them framed, which I haven’t dismissed as a DIY project.

With this paint on, it ticks off the last item in the original renovation plan (which was a Five Year Plan but, you know, scope creep). So why aren’t the champagne corks popping? Because it’s sorta like Bush’s “Mission Accomplished” — just a meaningless milestone. The war’s far from over. I’m still about three years-plus away from actually being done, and that’s only if I don’t think of something else to do between now and then. Next up is the stained glass, followed by refacing the stairs. Then I’ve got to rock the basement ceiling and stairway walls, add a banister to the basement stairs I built, refinish the first floor, rebuild the outside entry, lay ceramic tile on the basement floor… yup, another Five Year Plan coming up.