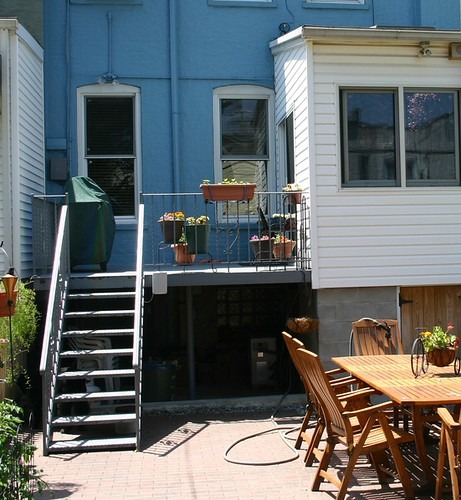 I know it’s been six months since my last update here but there hasn’t been much DIY stuff to blog about at Brooklyn Row House… not even something worthy of a Facebook status. Fact is, most of the work here is done but now I’m facing Phase 2 — maintaining all the new stuff which has begun to show the wear and tear of the years and the many boisterous animals. For that reason I think I’m going to jog this blog into slightly different direction, beginning with this post.

Three years ago, I had the back of my house professionally prepped and painted by Wallcoat. While I’m not thrilled with the color that I chose (my fault) I’m happy to report that it’s lived up 100% to its claims. There’s not a scratch on it, which is more than can be said for one of my neighbors’ Thoroseal jobs done roughly at the same time. I give Wallcoat five stars.

Far less impressive however was the paint job I did on my back deck. With my new, blue wall I wanted something other than a black steel deck. So I went to my local Home Depot and had a custom light gray Rustoleum mixed for me. After I pressure washed and wire brushed the deck, I laid down a coat of rusty metal Rustoleum primer. Because of the ornate metal railings, it was a lot of work with a 2″ brush but it looked great.

Fast forward one year and the deck didn’t look so great. There was definite foot traffic wear down to the primer, especially on the stairs. To me, this showed a failure of the paint. I knew it was only going to get worse so I repeated the clean/prime/paint ordeal, this time with a stock Rustoleum gray color. Perhaps the failure was the fault of the tinting. Who knows?

Well, that one started flaking off last fall too. WTF?? This is Rustoleum paint, after all. It’s the stuff that professional painters use on steel fire escapes every 20 years or so. It’s among the most durable of retail paints.

So last weekend I once again power washed, brushed and carefully laid down yet another coat of Rustoleum rusty metal primer. But before painting on the top coat I decided to check Rustoleum’s web site to see what I might have overlooked. It was there that I found the source of my problem. Note well: you won’t find this information posted on the can nor on the product page on the web site. You have to dive into Rustoleum’s FAQ to learn it.

Q. Can I use Rusty Metal Primer on clean metal?
A. No. The fish oil that is in the primer needs to penetrate into rust to seal out air and moisture. If there is no rust, the oil will rise to the surface making adhesion of the finish coat difficult.
Bingo. In other words, Rusty Metal Primer should never be used on already painted surfaces. I made a foolish mistake that I always warn others about: don’t trust the expert advice of box store “associates”. I told the saleman what I was doing and he recommended Rustoleum Rusty Metal Primer as “the best all around primer”, especially if there is any sign of rust… which of course there always will be with ordinary steel. So I used the same primer the next time I painted, and the next, and that’s why my paint job was failing!

So there I was left with a red primed deck against a light blue back wall and a guarantee that any top coat I put on it would also fail within probably a year.

I fired off an email to Rustoleum’s customer support department asking what I should do next. Let the primer sit for a few months? Wipe it down with mineral spirits? Paint on another kind of primer? I was dreading a response telling me to rent a sandblaster but instead got a nice condolence email back from Armando, a Rustoleum product support specialist. He said to let the primer sit for at least a week with no traffic. Then wash it down with soapy water and rinse. That should remove the oil. Then I should be able to paint it.

I only barely dodged a third bullet.

Two years later: nope. The finish coat did NOT hold up. Flaking began only a month or two after the paint was laid. The culprit appears to be poor adhesion to the primer.

Three years later: Based on the peeling paint, it looks like it wasn’t only the primer that failed but the paint on top of it. Home Depot custom-mixed me a Rustoleum color, a light grey. Rustoleum advises against any additives in their paints, including color agents. Another strike for the Hamilton Avenue Home Depot.