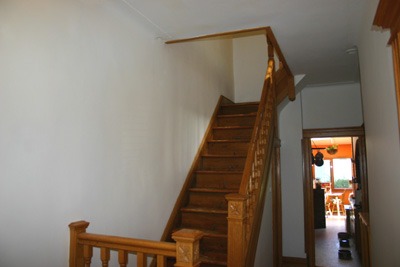 Ready for paint? I wish.

I’m gonna change the name of this blog to something more relevant, like Life Sucks And Then You Renovate. My apologies to anyone who might currently be using that name. I feel your pain.

It was supposed to be an easy, brain-dead job: just slap up some primer and paint over walls that had already been skim-coated and prepped several years ago. But I quickly got derailed and had to spend a couple of evenings last week dealing with this. That wasn’t in the plan, however it’s an old house so, you know, what else is new? But it gets better.

I managed to pick the day that Tropical Storm Hanna hit Brooklyn to roll on the primer. Even before the rain the outside humidity felt something like warm chowder. I knew it wasn’t going to be a good day to paint but I also didn’t want to push this off another week. The last time I did that, a week became eight years.

The priming was uneventful. Painting isn’t something I like to do. It’s boring and there’s way too much bending, climbing and twisting, especially with my back in the shape it’s been the past week. Fortunately, my next door neighbor is a terrific chiropractor so he fixes me every evening so I can mess it up again the next day.

Cutting in around the stairwell ceiling was a bitch because it’s so high: sixteen feet from the ceiling to the stairs. I don’t have a ladder this tall so I borrowed my neighbor’s 18 foot articulating ladder. John’s ladder is heavy steel and weighs about 75 pounds. Just unfolding that thing is a chore, especially in a confined space with nice, finished floors I didn’t want to gouge. I had to put the ladder into three different configurations to get the job done. After I finished, I reminded myself that I had to do it two more times to paint the ceiling and to paint the walls. Yay, fun.priming 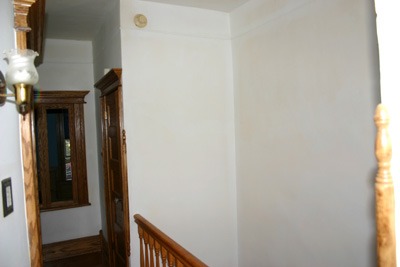 With that hefty ladder sitting on the stairs and me perched precariously at the top, the shopping newspaper monkeys decided to visit and toss their useless garbage at my front door. That always sets off the dogs so I knew what was gonna happen before it happened and braced myself for it. Auggie went nuts at the front door and Jack, my 110 pound black Newfoundland, dove down the stairs to join the barkfest. Problem was, there was only about a foot of clearance between the ladder and the (wet!) wall. I spent the next 15 minutes outside in Hanna cleaning white primer out of his coat. The irony of standing with a garden hose during a tropical storm wasn’t lost on me.

Otherwise, I finished priming late in the afternoon and started making plans for Sunday. I was on the phone when I noticed that I’d missed a spot over the bathroom door. No problem. The brush was still soaking in a coffee can. I set up the ladder and took a closer look. It was wet! I don’t mean wet with paint, I mean wet with water! The primer had already washed away and I was looking at soaked joint compound. It was right under that bathroom fan vent I thought I’d fixed. [Insert multiple curses here].

This morning, I went up on the roof to look at that vent again. The fixes I made to it last year looked good. No leaks. But I’ve always thought there was something odd about the shroud on that vent. Everybody else on the block has these mushroom looking vent caps that stand about a foot above the roof. Mine is flat with an opening on the side.

The bathroom exhaust fan was installed by a GC I’d hired in 2005 to rough out my bathroom. He was late for his vacation in Ireland (Strange-But-True fact: all Irish GCs migrate to Ireland for the month of August). He had rushed off leaving his crew to clean up the job. They in turn forgot to add a cap for that roof vent and as a result I had a flood at the first rain. It was like having a 4″ roof drain dumping into my bathroom. I called Frank’s cell and caught him in a bar in Donnegal. He apologized profusely and dispatched one of his workers to install the cap that day. Unfortunately, he sent the biggest idiot on his crew.

This morning, I Googled on roof vents and saw what I have here. As I suspected, it’s intended for a pitched roof, not a flat roof! The open side is supposed to point downhill. Igor, you moron! What should have been installed is something like the thing in the photo. It’s called a “flat roof jack” or “mushroom vent”.

Anyway, that job is on me. Frank moved back to Ireland, bought a pub and runs a construction equipment importing company in Donnegal now. I can’t safely proceed with painting until I get this leaky vent problem resolved. I drove all over Brooklyn today looking for a roof jack to no avail. I found one online. I just hope we don’t have any more heavy storms between now and then. 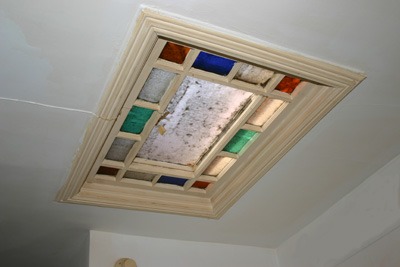 Now, on to the reason why this primer has been sitting on the walls for lo these past eight years. Above the stairway is a skylight. It’s original to the house and I hate it. To me, it looks like K-Mart plexiglass. My intent is to remove it, strip the woodwork, remove the muntins and design a new stained glass piece for the frame. It’s also unbelievably filthy, thanks to it being in a vented dormer. The problem is that the skylight is inaccessible by ladder. What you have to do — and this is one reason why it’s convenient living on a block full of identical houses where someone’s already had to do what you have to do — is build a temporary scaffold. Just some 2x6s and plywood. That will give me access both to the skylight and the dormer so I can make some waterproofing repairs in there as well.

I didn’t want to paint until I got that skylight installed. But I couldn’t live with this funky primer any longer. I can always touch up the paint afterward.