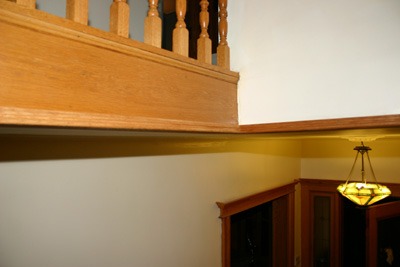 It started as an easy breezy project — an (almost) laborless Labor Day. Seven years ago, I scrubbed, scraped, skimcoated and primed the first and second floor hallways. Last year, I did a little more scraping and added another coat of primer. So why have these walls not been painted since I moved in nine years ago? Call it Home Stretch Complacency, Last Lap Crash, whatever. I just never got around to deciding on a color. Primer white was fine for now.

This weekend my intent was to deal with this, or at least add another coat of primer. I narrowed the finish paint down to two colors and had every intention of painting it today. I’d decide on the color at the Benjamin Moore store.

It was gonna be such an easy job, something that this old house doesn’t throw at me often. I mean, the walls have been prepped twice. All they needed was a tinted primer coat and paint. But just to be safe I decided to inspect the walls and take care of any nicks and gaps around the baseboards.

trim I decided I needed a piece of trim to wrap the corner between the second floor wall and the first floor ceiling. This would look better than a plain plaster corner. I had some scrap oak in the shop and a router bit profile that looked right for the application. A couple of hours later, it was up, stained and ready for me to move on. I inspected the rest of the first floor and I was satisfied. Ready for primer.

I knew I had a problem on the second floor ceiling that I needed to fix. Almost exactly a year ago we had a happening here that some of you probably heard about: Brooklyn’s first tornado since the 19th Century. I’d primed the upstairs hallway just the week before that F2 twister zoomed by, missing my house by 500 feet. But I didn’t miss the torrent of sideways rain which found a void in the flashing around my rooftop bathroom vent. A couple of weeks later I saw that the paint was lifting on the ceiling in the vicinity of that vent. It wasn’t bad. It needed about a square foot of scraping. NBD. 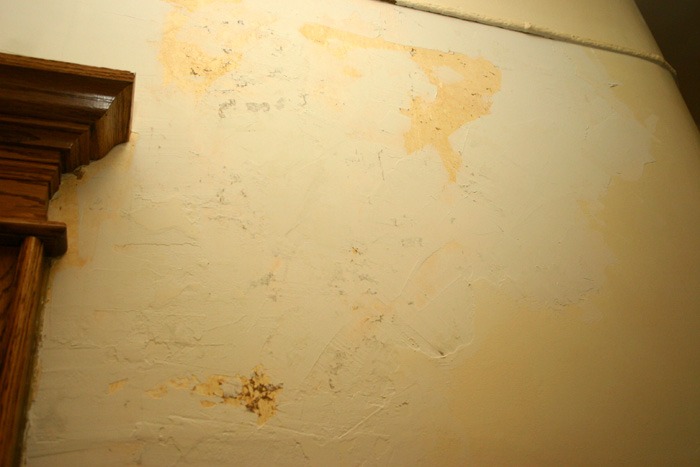 But when I started scraping, large thick hunks of paint were separating from the plaster, and they were getting bigger the more I scraped. I was stunned. I kept going until I encountered well-secured paint. When I was done, there was about 30 square feet of wall covering on the floor: a hundred years of paint, mesh tape plaster fixes, my skimcoat job, the works. I stared at the virgin plaster wall muttering, “WTF?!”

How did this happen?? Since I moved in I’d scraped this wall twice, once with a pull scraper over every square inch of it. That wall was solid as a rock last year.

This couldn’t all be water damage. The leak wasn’t that big and the plaster didn’t show any water staining except around the little patch on the ceiling. Besides, I was pulling off chunks of paint as large as a dinner plate several lateral feet away from that leak.

A closer inspection turned up another culprit.

This wall had apparently been wallpapered originally. Whoever had laid on the first coat of paint had removed the wallpaper but neglected to remove the paste. It was there, clear as day. As I scraped I just kept lifting that first coat of poorly-adhered oil-based paint, along with a century of whatever was on top of it.

I scraped off the old paste, washed the wall with TSP and brushed on some plaster binder. Then I spread on joint compound to feather the edges. Tomorrow I’ll test it for adhesion. If it looks good, I’ll break out my trusty Magic Trowel and skim coat it again.

The lesson here is that no matter how thorough you are with wall prep, you’re never sure how solid things are fifty or a hundred years below. Perhaps if I’d really dug at this wall with a sharp scraper last year I would have lifted a small piece of it, which would have started the chain reaction I encountered today.