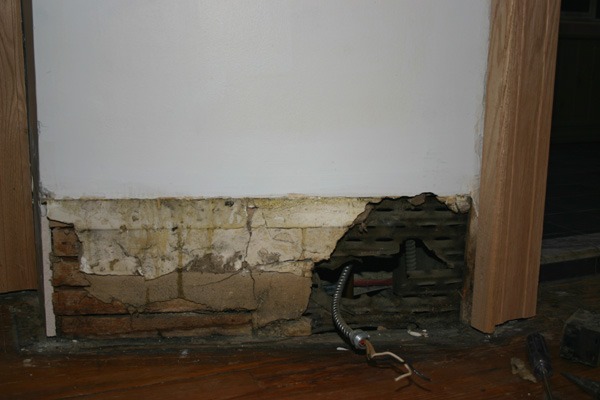 The Mystery of the Ducts To Nowhere

This house has ancient, single-pipe steam heating. From what I’ve been able to determine from digging in these walls over the past seven years is that it’s always had steam heating. Nothing interesting there.

What’s baffling is why the house also has ancient metal air ducting buried inside the walls. I discovered this shortly after I moved here when I ripped down the basement ceiling and found three vertical ducts to nowhere. Over the past hundred years, various plumbers and electricians had used them for service pulls. So did I when I ran 3/4″ copper to the second floor bath, the central vac piping and various electrical branches from the basement panel. 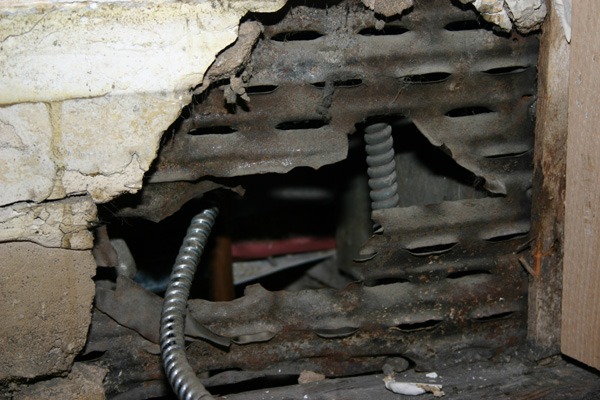 Here’s a closer look. The ducts are a fairly heavy gauge steel wrapped in another layer of corrugated steel, which functions as plaster lathing. It’s real nasty to work with. It takes quite a bit of effort to knock a hole in this stuff. Because the ducts aren’t anchored to anything, you can’t use a saw on them. They just flap around, loosening the surrounding plaster. And after you succeed with tin snips you’re left with metal edges as lethal as a machete blade.

There used to be an old baseboard outlet here. I hate baseboard outlets. They’re inconvenient and a trip hazard when anything is plugged into them. My intent was to move that outlet up the wall. But once I removed the baseboard and saw the ducting (which I’d forgotten about) I decided I liked my unlacerated flesh more than I hated baseboard outlets.

Since all the original upstairs moulding was painted poplar and I was going for natural wood, I ditched the old baseboards and cut some new ones on my router table. They’re identical to the originals with the exception that they’re red oak.

PS: the gap at the bottom of the door casing is to accomodate a new engineered floor. The baseboard will get a shoe moulding so a gap doesn’t matter. PPS: that white electrical device is an Insteon home automation repeater. It will go away after I install the Insteon wall switch above it. 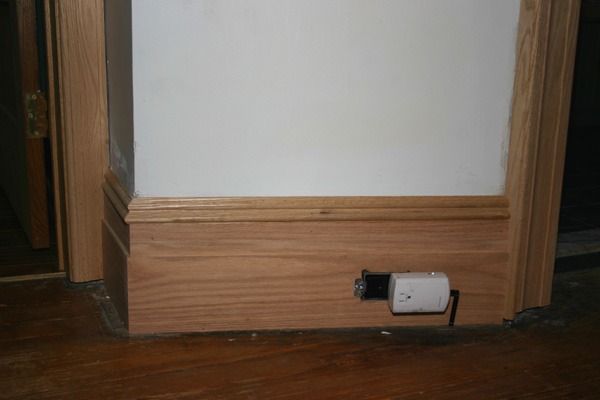 I’ve dumped a lot of grief on big box stores in my blog but I have to give Lowes props. The Brooklyn Lowes carries the nicest red oak I’ve ever seen… much nicer than Dykes or even Rosenzweig. The grain is so clean and the boards so straight, uniformly colored and well-seasoned that they almost look fake. It makes Home Depot’s pathetic hardwood look like skid lumber.

Anyway, back to these puzzling air ducts. Being compulsive about such things I wanted to know why the original builders installed forced air ducts in a house they knew they were going to plumb for steam heat. Maybe the builder changed his mind halfway through?

I decided to widen the investigation to my neighbors. What I found was even more enigmatic. Every house in my row as well as the row across the street was built with forced air ducts. But what’s weird is that the actual installed heating systems alternate with each succeeding house: steam, forced air, steam, forced air. Was this some kinda control study into this new fangled forced air heating?

If that’s not a riddle wrapped in a mystery, forced air depends on an electric fan. But this house had gas lighting when it was built. The old gas pipes are still in the ceilings and walls, some running next to the vertical ducts. I know the electrical wiring here wasn’t original to the house so there couldn’t have been an electric blower when it was built.

A retired, greybeard plumber had the answer. In the olden days, these homes would typically have been built with a wood or coal furnace in the basement. It fed into a steel plenum with dampers which then branched off into ducts. The warm air rose by convection — no fan necessary. Often, there are no return ducts. Floor gratings allowed the heavier cold air to fall to the floor below and eventually back to the basement.