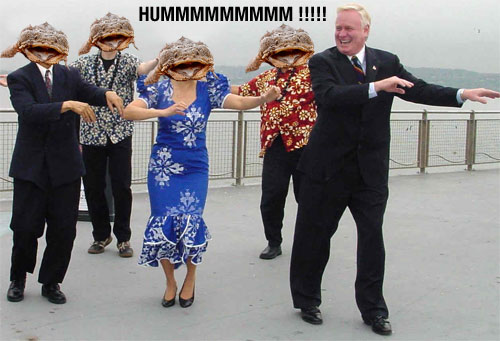 Out-worlders would probably expect Brooklyn to sound like inner-city traffic, police sirens and “Yo! Vinnie! T’row me down some money fa a’ egg cream!” Actually, it’s pretty quiet down here by the harbor, except for the low-flying NYPD helicopters. And ambulances.  And La Guardia jets on approach.  And Belt Parkway traffic…

Nevertheless, I have two “bizarre noise” stories. I’ll talk about the most public one first and, if I can keep it short, I’ll tell the other one.

In late 2005, I was at the dog run when an obviously exhausted woman told me that she was kept awake all night by a loud hum outside. She lives only three blocks from me so she asked if I’d heard it too. I told her I was sorry but I hadn’t heard a thing. She bore on, telling me that it sounded like a low engine rumble, almost like a fog horn, except it was non-stop. I thought there might be a simple explanation: she was nuts.

A few months later, I read an article in our local paper, the Bay Ridge Courier. It was a brief interview with a resident on Colonial Rd complaining about “this awful noise”. She had heard it too. I still hadn’t.

Shortly after that, the Brooklyn Paper picked up the story. Then the NY Sun. Then the NY Daily News. I’m told that even FoxNews did a story on it. A local reporter, Matthew Lysiac, has made it a cause célèbre.

Okay, even though I still haven’t heard it, lots of people in my neighborhood have. They can’t all be crazy. On the other hand, I’m not deaf either and I’m usually out walking the dogs at 1am when it’s so quiet I can hear a traffic accident across the harbor in Staten Island. Is this something like Tinkerbelle? You have to believe it to hear it?

Whatever, the local pols are all over it too. Last month our city councilman, Vincent Gentile, said that he’d solved the mystery. The culprit was the bizarre looking oyster toadfish and its noisy mating ritual.

Mr. Gentile had contracted the services of a prominent marine biologist and that was his conclusion. Case closed, right?

Not quite because nobody had actually seen an oyster toadfish in the waters along Owls Head. His former Republican rival, Marty Golden, had a little fun with the Hum buggers in the photo above.

But Gentile wasn’t sold on the answer either and asked a Cornell professor of Neurobiology with the improbably funny last name of “Bass” to confirm the toadfish story. He couldn’t. In fact, he didn’t hear or see any toadfish either.

So we’re back to square one and all the convoluted and fantastical explanations: global warming and an inversion layer funneling refinery noise from New Jersey, wind causing the Verrazano Bridge cables to vibrate, secret underground tunneling for some Men In Black headquarters, which of course leads us to UFOs.

Bottom line, there’s an awful noise that’s apparently loud enough to disturb the sleep of reasonable people over almost a square mile which I haven’t heard and no one knows what it is. Maybe it’s just an elaborate practical joke against me.

I’ll tell my own strange noise story in a later installment.