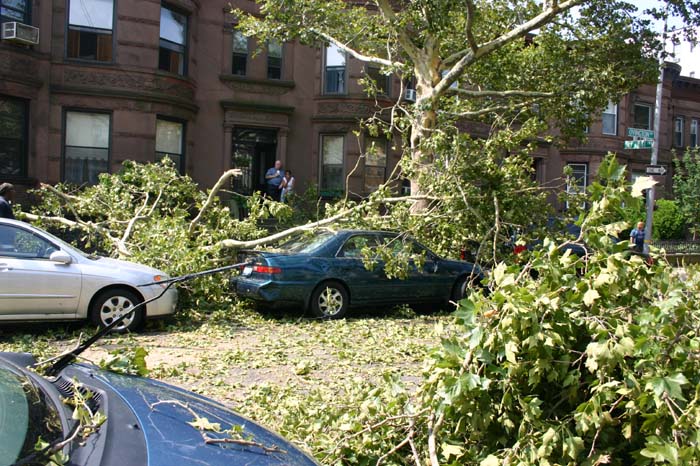 A Tree Blows Down in Brooklyn

About 5:30am this morning I was suddenly awake. I’m not sure if it was the threatening thunder approaching from the northwest or my shivering, hundred-pound Newfoundland desperately trying to crawl under the covers with me.

Outside, it was like War of the Worlds. Lightning was flashing like a paparazzi frenzy and the thunder was getting progressively angrier. I heard the rain starting. Within minutes it was coming down in buckets. Seriously, that’s what it sounded like: someone dropping buckets on my roof.

By now, most of you have probably heard that Brooklyn experienced its first tornado since the 19th century (and that one was barely a dust devil). Because modern Brooklyn doesn’t like to do things small, this one was an EF2, as classified by the National Weather Service this afternoon. My immediate neighborhood was its landfall before it worked its way north-northeast and into Sunset Park, Boro Park and Kensington.

At 5:45am I crawled out of bed to check my bathroom vent. I’ve had problems with it leaking during heavy storms. It was almost gushing. The bathroom floor was completely wet. I broke out some towels for the floor, pulled off the vent fan cover and stuffed a couple of more in there. Then I went to the window to check the status of the furniture on my front deck.

The sun was just starting to come up and the air looked strangely green. Somewhere an old memory recalled that that’s a bad sign. I just didn’t know of what. Then the wind picked up and the rain started blowing sideways. I watch the Bug Channels. I knew what that could mean. But I also work with folks from the National Center for Disaster Preparedness and everyone’s always told me that the topography of NYC almost precludes tornadoes from making ground fall. They can’t happen here. Or were they just talking about Manhattan?

The rain outside looked like it was blowing in a wind tunnel. Wait, isn’t there supposed to be a sound like a freight train? I made a quick decision that if I heard that train a comin’ I would beat a hasty retreat to the basement with the animals. Then I heard it. But the dogs and cats had already hopped on the clue bus and were downstairs in the shop wondering what was taking me so long. I was the lone moron left staring out a second story window with a tornado bearing down on me.

Then the wind suddenly stopped. A few minutes later, the rain became a drizzle. The block looked fine — just a few small branches and lots of leaves in the street. But even my hanging planters were still hanging. Big deal.

My satellite TV finally got a signal again around 7am. There was talk on the local news about a tornado warning in Brooklyn until 7:30. I was glad we had dodged that bullet. A tornado in Brooklyn — now that would be something to see!

When the rain finally ended around 8am, I took the dogs out for a walk. My street was fine, the park looked fine. But two blocks away it was destruction city. All that was missing were flattened house trailers. I was shocked. There was no question in my mind what had caused surgical damage like this. It was a tornado and it missed me by about 500 feet. And there I was, staring out a plate glass window at it while the animals had the good sense to head for cover.

It was incredibly hot and humid so I brought the dogs home, grabbed my camera and did a tour of the neighborhood. Here are a few shots.

The photo at the top is Ovington Street, two blocks from me.

You can find my full set of Brooklyn Tornado shots here. 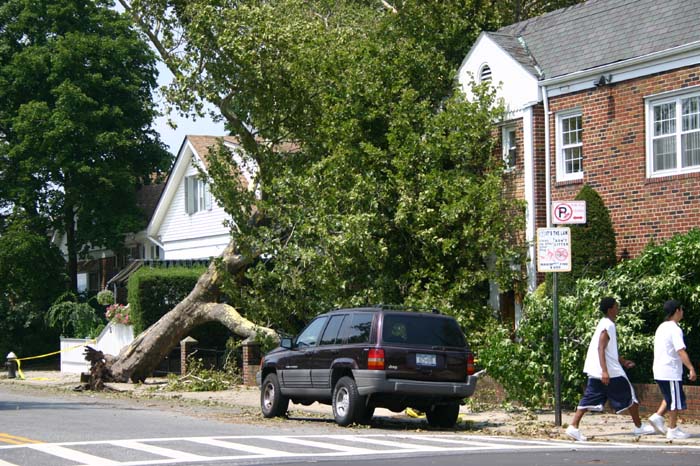 This is Shore Road, where the tornado made its initial land fall. It’s still not certain where the tornado formed. Speculation is that it started as a mild F0, dancing across Staten Island. Then it gained strength as a water spout in NY harbor, which is visible beyond the trees in this shot. The destruction on Shore Road and neighboring Narrows Blvd was among the worst in Brooklyn. Cops shut down streets with heavy structural damage so my pics are mostly foliage shots. Almost every block in the lower 70s from Shore Road to Third Ave had a scene like this. 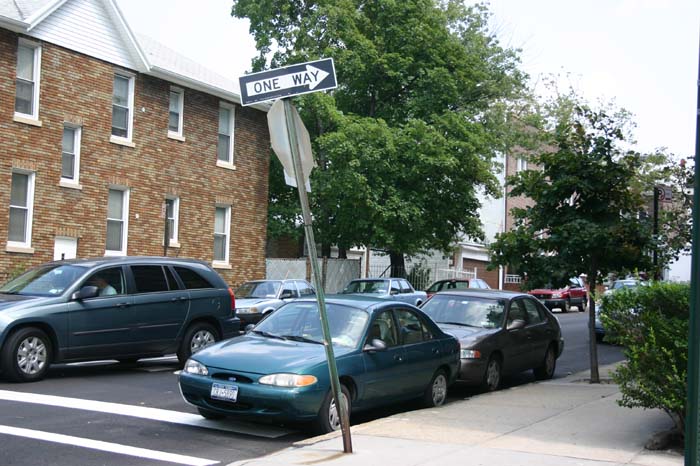 This picture is subtle. No trees down, no smashed cars, no destruction, right? So what’s wrong here? Look at the stop sign. It was twisted about 100 degrees, in the same direction as a tornado’s rotation. That stop sign was facing the right direction two nights ago because I almost ran it accidentally . 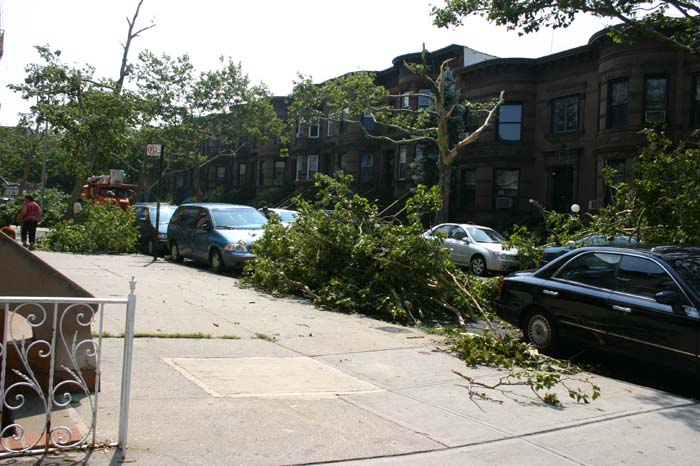 This used to be one of the most heavily tree-lined blocks in Brooklyn. Out of probably forty hundred-plus year-old oaks and sycamores, this is all that remains of them.