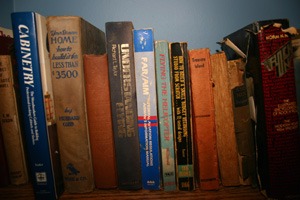 Considering the probably millions of bucks that we housebloggers collectively squander annually on new roofs, new additions, central air and glass door knobs, if there was a ever a low, slow ball over the plate for this group, this was it!

Bragging about my tool collection was the first thing that popped into my head. but I just got off a nine-month bedroom reno project and I’m tired of talking about tools.  I wish I could boast about my auction and flea market finds but I’ve been pretty disappointed by them the past year or two. All I bought at the last one was a bag of kettle corn. Home automation? Not again.

Instead, I want to talk about something I’ve had since I was a kid: a book that my dad bought in 1950 before I was born and later gave to me to learn how to help him frame a new room in our basement.

Here it still sits on my bedroom bookshelf, along with several other books he gave me — some from his own childhood. Can you spot it?

No, not the flight instruction manuals. Not that 1938 edition of Treasure Island. 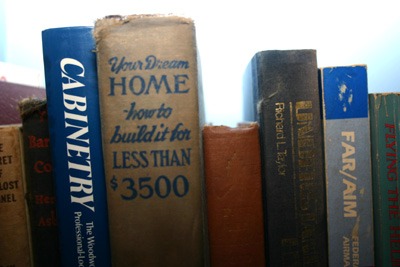 Let’s go in for a closer look.

At a time when $3500 is a monthly mortgage payment for many people, this must seem like a cruel joke. But the book was dead serious. In fact, according to the book, the plans were submitted to building supply firms in four different areas of the country. $3500 was the highest bid.

Okay, it’s a pretty basic cottage. It might not be Camelot and it might not be a $10M brownstone mansion on Prospect Park but it’s not Tobacco Road either. There are two good-sized bedrooms, a 12×18 living/dining room, an 8-1/2×17-1/2 kitchen, a stone terrace, a semi-finished attic and an enclosed garage. And not just one car but two! And central heating. 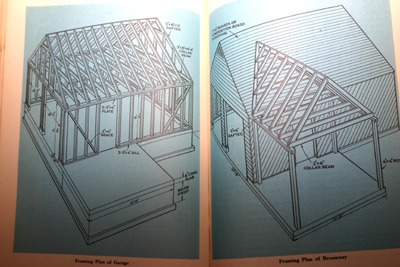 This, my friends, was the start of my long slide into Stage 3 tyromania. This book is what introduced me to the skeletal, cardiovascular, muscular and (yes) urinary anatomy of a house. I read this thing from cover to cover before I picked up a hammer to help dad build that basement bedroom for my older brother — before slamming it on my thumb about a minute later. It hurt like hell but I persevered.

A year later, when I was 12, this book was also my guide to laying a concrete sidewalk in our Virginia back yard. Thanks to the excellent drawings and unpretentious commentary, even a fairly ADD kid like me could understand the mysteries behind the paint. Except in those days “ADD” meant “bratty”.

In fact, it was my bible until I turned 26 years old, when I started investing in headier construction and construction theory books like two others you’ll see on that shelf, Michael Rettinger’s, “Studio Acoustics” and “Acoustic Design and Noise Control”. 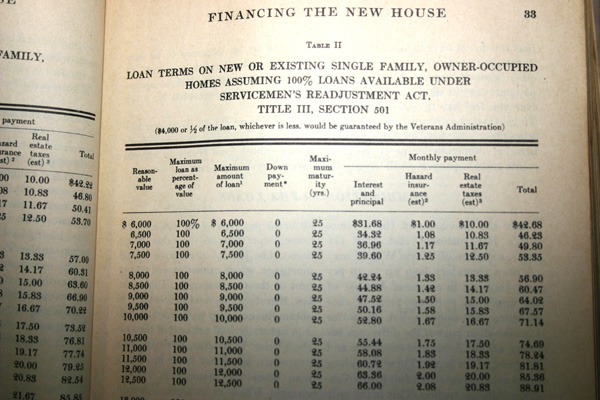 What really kills me though is this page:

Including mortgage, insurance and taxes your monthly nut on the loan to build this house would have been $42.68! Or at least it would have been for my dad, who was military. For the draft dodgers it would have been a whopping $43.63/month. And that’s with the 40% loan amount cushion the book recommends for DIY types who tend to overestimate their competence with major building projects.

At least some thing don’t change.