Tomorrow, Oct 15, is Blog Action Day and tens of thousands of bloggers like me have each committed to writing an article about the environment. BrooklynRowHouse is about old home renovation and improvement so this topic is a low, slow ball over the plate for people like me.

Do you like how I worked in a baseball metaphor during playoff season? This will be a long article and I need to use whatever cheap literary devices I can to hold your interest because there are thousands of bloggers out there who write better than me and we’re all writing about the same thing.

I think a lot of us old house shut-ins are going to contribute something along the lines of this:

If you’re thinking about downsizing from the SUV parked in your garage, consider what’s possibly parked in your utility room: a 30 year-old, low-efficiency heating system and a 20-year old water heater. Unlike your gas guzzler, your heating system is cranking 24/7 during the winter months, spewing money and dead dinosaurs up the chimney. You might spend 30 minutes a day with the engine idling in gridlocked traffic. But your water heater is idling all day and all night, burning unnecessary fuel, waiting for someone to come along to wash Fido’s bowl. For the sake of the environment, your pocketbook and the diminishing buying power of your yuandollar, think about investing in a new heating plant and an on-demand hot water heater now.

I could write about that.

But despite the topical slant of this blog, my professional title is “techno geek”, not “HVAC installer”. Truthfully, I don’t know if changing my boiler would result in much more than a change in environment for my plumber’s Christmas vacation plans. I spend most of my day debugging code (sadly, my own) looking for polluting little cockroaches sucking the energy out of my programs. So I have another perspective on this energy/environment thing.

There’s a company out of Australia with a web search site called Blackle. If that sounds vaguely like Google that’s because it is Google, or rather a rebranded one. Check it out.

A black Google? So what’s that got to do with global warming?

According to the company, a white pixel takes more energy to generate than a black pixel. A US Dept of Energy report states, “White and bright colors (especially in backgrounds) can use up to 20% more power than black or dark colors.” One web site actually calculated that difference. An all-white background consumes 74 watts versus an all-black background at 59 watts. They further went on to extrapolate this with a prediction that if Google switched its site to a black background this trivial change alone could save a whopping 750 megawatt hours a year!

Is black the new Green?

Wellllll… 750MWh is the equivalent of 17,700 gallons of oil, which refines down to about 8500 gallons of fuel. That’s still a lot but it’s probably what Air Force One burns on just one of Bush’s 75 vacation trips to Crawford since 2001, which segues to…

We’re not going to change anything in this country, let alone the world, without honest leadership and politicians who, even if they’re also taking a vacation from developing a meaningful national energy policy, can at least attempt to set an example for the rest of us to follow. Not just more “go shopping”.

What my Blog Action article is really about is common sense and perspective. With increasing focus on new energy technologies, we all need to kick our bullshit filters up a notch. I don’t mean just with self-serving pols and pundits yammering about “hydrogen cars” and “carbon credits” but with some of the voodoo technologies piggybacking on it as well.

Using RF to set seawater on fire, miracle energy tubes that break the Second Law of Thermodynamics and magic energy from magnestism are only the latest wave of snake oil solutions which will unfortunately and probably increasingly eclipse hard science in the mainstream media and it’s typical “Ooo, pretty lights!” coverage of anything more technical than MySpace.

PS: I love my older brother’s comment about John Kanzius, the radio engineer who discovered that salt water igniter in the first story: “The only thing he discovered is something we already knew. Retirement sucks!”

That’s not to say we should be cynical about unconventional energy concepts because the real science that’s being practiced in our universities is actually a lot stranger and more interesting than this hype.

For instance, here’s an unlikely but intriguing new bioreactor idea which is getting some attention in the conventional research world. Ironically, it’s also one which is sadly all too familiar to those of us with old houses. The termite. 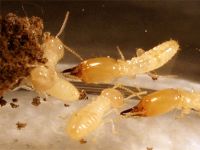 To its credit, the mainstream media actually did pick up this story, then blew it out of scale as usual: Bugs in Termite Guts May Offer Future Fuel Source.

I’ve been casually following this curious discovery for a while. My neighborhood is a termite free-fire zone so I’ve done a lot reading on these little buggers. It turns out that they may be little heroes instead. They address two large problems. One is generating biomass fuel so that it doesn’t consume more energy to make it than it produces. The other is what to do with the mountains of unrecycled organic refuse we generate every year. That includes the huge amount of organic waste left over from current corn-based biofuel production. The microbial brew living in the intestines of termites may provide an answer for both.

Here’s an interview with Berkeley Labs’, Steve Chu, who adds some perspective to the termites-as-energy-source story.

But if my admiration for these creepy little bugs wasn’t enough, there was an even more curious discovery. One of the byproducts of termite digestion is hydrogen. A termite generates two liters of hydrogen as a by-product from consuming a single piece of letter-sized paper. This is stunning because conventional hydrogen production is a very expensive process, requiring as much energy to make it as it delivers.

Can the world be saved by termite farts?

But, wait! These critters may have something else to teach us about energy conservation. It seems that African termite mounds possess some pretty amazing properties that might find a practical application in constructing stronger, more energy efficient buildings.

Real science is even more amazing than the fake stuff.

Summing up, it would be nice to dump that fat-arsed SUV you don’t really need. You should invest in higher-efficiency appliances and tighten up your home. But hybrid cars, CFL light bulbs and black pixels are just a sideshow. We need to realize that no matter what political stripes we might wear, we’re all fighting the same survival clock, if not for ourselves then for future generations which are counting on us to fix what they didn’t break. This isn’t a liberal/conservative issue or a democrat/republican issue. It’s a smart/stupid issue.

Moving the world to newer, safer forms of energy and putting ourselves on an energy diet in the interim is one of the toughest challenges we’ve ever faced. It will require visionary leadership committed to its success, not more sock puppets telling us what we want to hear and only what they want us to know.