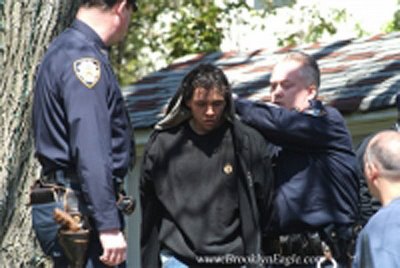 So we’re experiencing a sudden crime wave in my peaceful ‘hood. Nobody’s said WHY this is happening but according to The Brooklyn Paper:

During a 28-day period starting on Sept. 5, crooks broke into 39 residences in Bay Ridge — an increase of more than 60 percent compared to the same four-week periods in 2007 and 2006, when there were 24 and 21 burglaries respectively.

Yikes! But I can’t say I didn’t see this coming. A few months ago, a junkie broke into a house a few blocks from here. Even though the place had central station, it was a vigilant neighbor who called 911 and the burglar was captured. Above is a photo of his actual arrest, courtesy of the Brooklyn Daily Eagle.

A few months before that, the neighborhood went into an almost military lockdown when NYPD had a home invader trapped somewhere inside an eight block perimeter. The lightning quick and coordinated police response numbering at least 200 uniforms was really, truly impressive. A bit scary actually because I didn’t know what they were looking for. They even had the Coast Guard Police manning some road blocks. The perp was caught by an “undercover canine unit”. (What’s that… a Rottweiler dressed like a poodle?)

This is where NYPD really shines: in these special ops. When it comes to fighting major crime, NYPD has no equal. Maybe it’s one of the benefits of having 38,000 cops that they can conduct these shock & awe responses. I lived on Manhattan’s Lower East Side, a neighborhood that was a drug and crime free-fire zone for decades, when Pressure Point cops moved in and, within a few months, made it safe for market-value apartment development. Today, you’d never know that Avenues A, B and C used to mean “Always Be Carrying”.

The problem is getting NYPD motivated to handle mundane police work, like traffic stops and writing blocked-hydrant tickets. 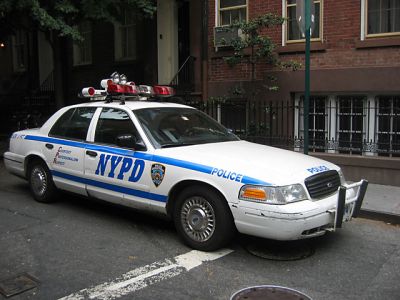 Because I usually work late, I take the dogs out for a long last walk every night between 1am and 2am. As the 3rd Avenue club scene expands closer to my neighborhood, I’ve been seeing a gradual uptick in seedy characters in the area.

Crooks are like street vendors. They go where the money is. In this case though, it’s hookers, drug dealers and muggers specializing in drunks. In fact, for months a hooker who calls herself Georgette (literally every George I know is more appealing) has greeted me each night as I make the turn onto 3rd Avenue: “Good evening, dogs. Hello, dog daddy.” I’d like to say she’s innocuous but I also know that she’s dealing crack as well.

I see her every night but one thing I never see is a cop. It’s so bad that you can safely park your car at a fire hydrant all night long, every night, and never get a ticket. It’s outrageous insofar as you can actually see the 68th Precinct house from there, which is also the headquarters for Brooklyn South, ESU (SWAT), Narcotics, the works.

That is, until this past week.

Our state senator, and a former NYPD cop himself, held a town meeting last week to deal with public outrage over the crime problem and put the Deputy Inspector who runs our precinct on notice. All of a sudden, cops are everywhere.

A few nights ago, I encountered a dozen cops searching a backyard a block from here. The night before that they were searching an alley with K9. I’ve even been stopped and questioned. The cop wanted to know if I’d seen anything suspicious, which made me suspicious that he was actually checking out me. So I volunteered my driver’s license. Maybe he thought Jack and Auggie were the Doberman Gang.

I’m taking the dogs out now. I’ll report back in a bit….

Well, I didn’t see any cops but I also didn’t see something else: Georgette nor any of the medicated lowlifes who usually lounge on the benches in the pocket park on 3rd Avenue. That’s a first for the year.