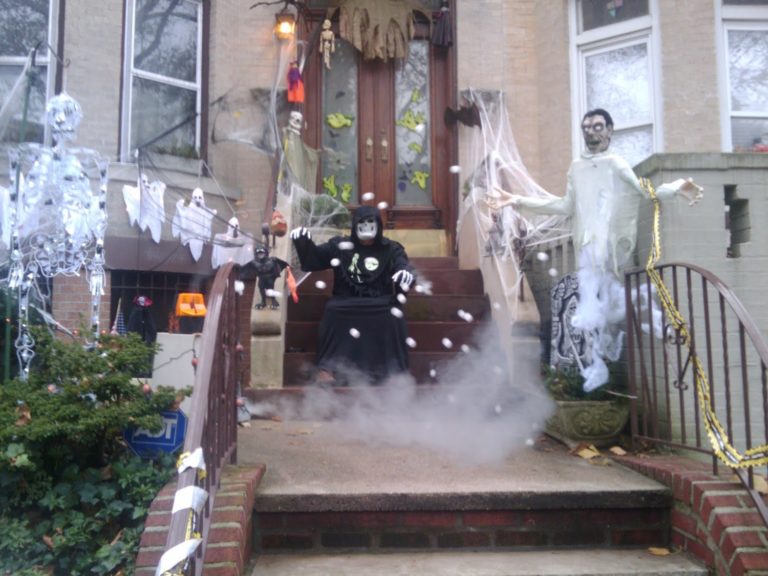 The neighborhood was a mob scene of power rangers and fairy princesses tonight. Our state senator had the brilliant idea of turning the park down the block into “Haunted Halloween” with a disco, a haunted walk, hay rides, a food court and kiddy amusements as a safer alternative to trick-or-treating. As a result, half the kids in Brooklyn were there. Then they assaulted my neighborhood for their sugar rush. Next year I want a government subsidy on my candy supply.

Halloween is a kids’ thing and since I don’t have kids it’s not exactly my thing. But I endure it and get to meet a few neighbors in the process.

I haven’t posted anything about the master bedroom renovation in almost two weeks. I haven’t been loafing, just too busy to sit down and write anything. The plaster repairs are done. I skimcoated and primed the walls and have begun the wainscotting and preliminary finish carpentry. 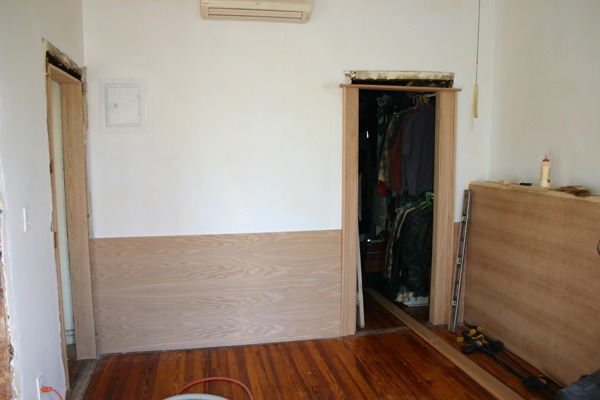 I never noticed how out of level this room was until I reframed this walkthru closet doorway (inside which you can see my extensive wardrobe of plaid from the Norm Abrams Collection). Yikes! My new framing looked so off that I had to check it with three different levels just to make sure that a doorway could really be 1.5 inches out of level.

The oak plywood is the backer for judge’s paneling, which I’ll start on next week after I get all the backers up. 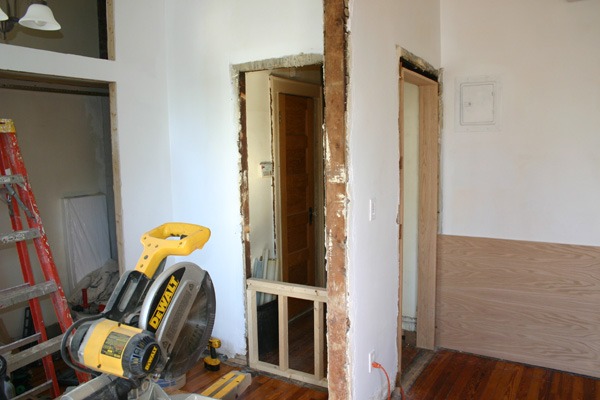 I’ve also rough framed for the stained glass french windows to eliminate that redundant doorway into the bedroom. I was originally going to make it higher off the floor so I could squeeze a desk or something under it. But I did some testing and found that it would make the hallway too dark. Also, a smaller window looked weird. 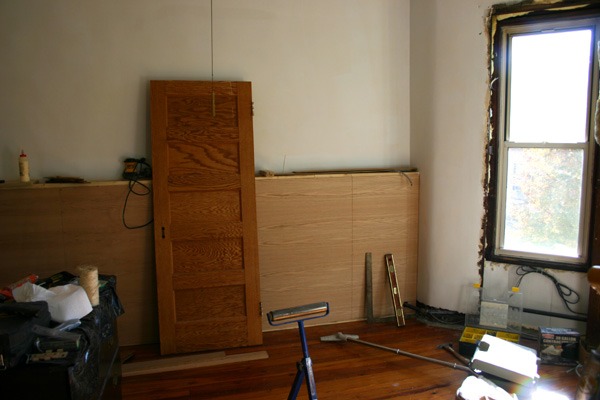 Just to prove that it’s not all new work, this is a salvaged street door, found in a dumpster on the next block. It took a gallon of stripper but it will work nicely. Another coat of stripper, bleach and dark stain should make it a reasonable match to the woodwork. The lighting in this shot makes it look darker than it is.

I also spent probably two days screwing around with the Insteon lighting automation. I dunno. If Insteon is the successor to X10 then it might be its evil offspring. Or at least these wall controllers are. What’s infuriating is that it installed without a hitch. But then it started getting cranky. At the moment, the cool blue-backlit controller is just an expensive night light. I have to turn the bedroom lights on from the laptop in my office. I’ve been too busy to pick up the phone to sit on hold with Smarthome to get to the bottom of it but, hopefully, there’s a magic trick I haven’t learned about it yet. I just hope it’s not a portent of things to come because I’ve got a large, expensive box of Insteon stuff downstairs waiting to replace all my problematic X10 gear.

As to the woodworking, I don’t know why I bother with drawings. As much as I try to plan my finish carpentry, it always winds up being a jam session. Without fail, as soon as I tack up the first piece of trim the plot changes. So I’ve decided to play this by ear, as usual, and see how it all comes out.

That’s actually just as well because I found that because of the staircase turns I couldn’t get the 4×8 sheets of red oak plywood up two stories by myself without scuffing them. So I had to slice them up, which meant changing the wainscotting design to hide the extra seams. What I settled on was something I liked better than what I was originally going to build so it’s all good.