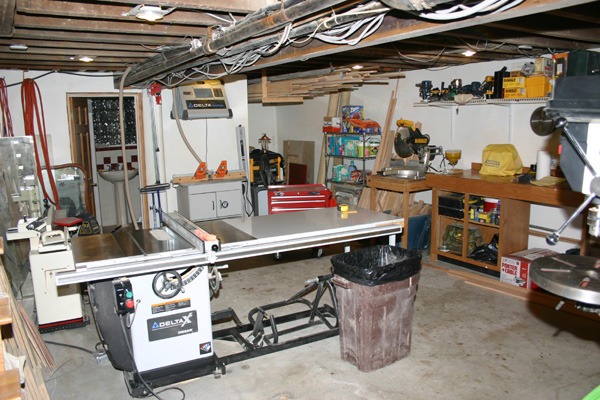 With a challenging software project winding up, the top floor reno winding down and my tools reunited with their friends in the basement, it was time to turn my attention to the crime scene that used to be my shop. This cleaning has to last several months because it will probably be that long before I’ll be using the tools again.

I don’t mind working in a messy environment but I can’t start a new project unless everything is neat and tidy, with every tool in its proper place, the table saw waxed, stationary tools aligned, blades sharpened, etc. This is my operating room, after all, and you don’t open up a new patient with the last one’s blood still on the walls.

Today was the marathon cleanup of the past nine months of mayhem. It actually began last night because I needed to catch this morning’s garbage pickup. Did I mention how much the Sanitation guys love me? They even autographed one of my garbage cans a few years ago, scrawling “Balls!” on it with black magic marker. 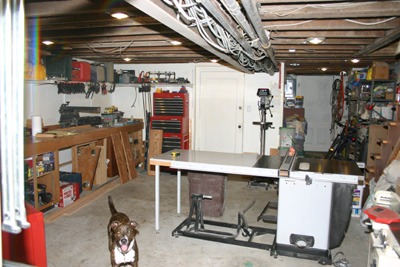 Out went four large garbage cans of wood scraps, some of it legacy leftovers from earlier renovation projects — a lot of it short pieces of crown moulding and casing that had been piling up for six years. I’m all done with the windows and doors so out it went. With it went a bunch of drywall scraps, most of it damaged in a small basement flood last year. This morning I saw that I’d gained about 40 square feet of usable shop space! That motivated me on a minimalist mission to get rid of more junk. I had the urge to purge. A few hours later, I had six more full garbage bags. Workshop bulimia!

On these cleanup safaris, the rock star in the shop is the central vacuum. My Vacuflo way outperforms any shop vac and, more importantly, it doesn’t throw fine dust back into the room nor does it stir it up. It’s all ventilated outside under the back deck. In fact, despite what the snobs say on rec.woodworking it works well enough to double as my dust collection system. I have dust outlets on most of my tools which plug into vacuum ports in the ceiling.

Today was my personal record: 11 gallons of sawdust and other debris sucked up by the vac. As I said, it was a mess. 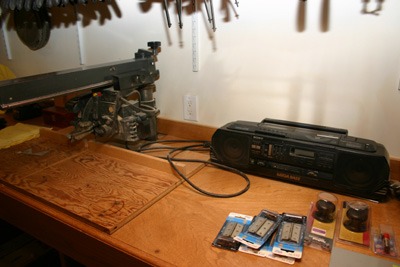 One thing I want to install in the shop are speakers so I can pipe in XM radio from the living room DirecTV. I only watch TV in bed so that satellite box is pretty much dedicated to XM’s Deep Tracks station fourteen hours a day.

I’ve got a blaster in the shop that’s stuck (literally and sadly) on Q104.3, NYC’s oldies station which seems to believe that people want to hear “Touch Me” by the Doors five times a day, every day, year in, year out. If an alien landed here and only had “the Q” to listen to he’d think that humanity was so artistically devoid that it only managed to create a hundred or so songs over the past forty years. And that a lot of them suck. Sorry, but who nominated Meatloaf, Kiss, Styx and the Steve Miller Band for history’s musical time capsule? Finally, to complete my rant, didn’t they teach these guys in DJ school about another pop phenomenon in the 60s called Motown? 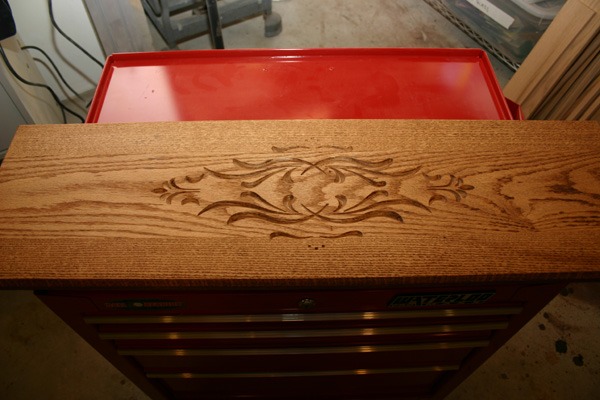 I completed building and installing the drawers in the master bedroom cabinet. There’s not much to show there. I was going to go fancy on this with dovetailed joints and poplar drawers but decided to go with birch ply for stability. Dovetails don’t look very good on plywood, even if you can manage to hammer them together without separating the plies, so I used rabbeted joints made on my radial arm saw with a dado blade. I used 1/2″ birch ply on the bottom because these are big, deep drawers and I don’t want any sag.

This is one of the drawer faces I built. I decided to extend the carvings I did on the cabinet’s upper rails to the drawer fronts. These are a different design though. I hope that cabinet’s not going to look too much like “hey, look what I can do with my router!” 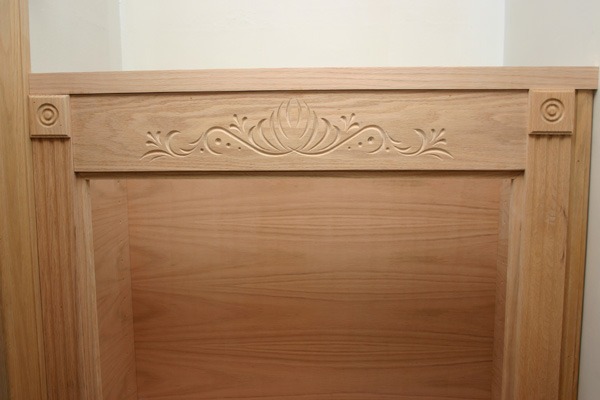 Here’s one of those cabinet carvings, pre-crown moulding, stain and finish. I really hope this works.