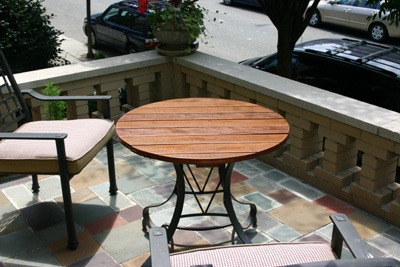 A Case of the Mightaswells

If you own home in progress, whether you’re a DIYer or someone who calls a contractor to change the lightbulbs, you know the syndrome.

“As long as I’m updating the kitchen, I might as well make it larger.”

“As long as I’m opening up the wall, I might as well add a central vacuum system, split-unit air conditioning and a new 50a riser to the second floor. And a whole house beer tap!”

You think I’m making this stuff up? That’s me, folks! Well, except for the beer tap but, believe me, I came very close to doing it. And compressor outlets on every floor too.

Anyway, the mightaswells struck this weekend when I decided I needed to sand and add a coat of Danish oil to the ipe table I made for the living room deck a couple of years ago.

Karen found the wrought iron base in one of her dumpster dives and gave it to me. I picked up some ipe at Dykes and made the top. Unfortunately, I found that ipe and marine urethane don’t play well together. Maybe it’s the oils in the wood, maybe it’s because I sanded it down to too fine a grit, but it was all flaking off.

If you’ve never worked with ipe before there’s a reason they also call it “ironwood”. I had to get down to 60 grit just to make a scratch in it. I dulled a sharp drill bit to uselessness drilling holes to screw that base to the top.

So I hadn’t broken out the cushions for those chairs yet this season, which led me to deciding to hose down the chairs first. But I hadn’t cleaned up all the dead leaves on the deck from last winter so I decided to do that before they got wet. But why sweep it when I have a shop vac? And as long as I have the shop vac, I might as well vacuum the stoop… then the sidewalk… then the garage. 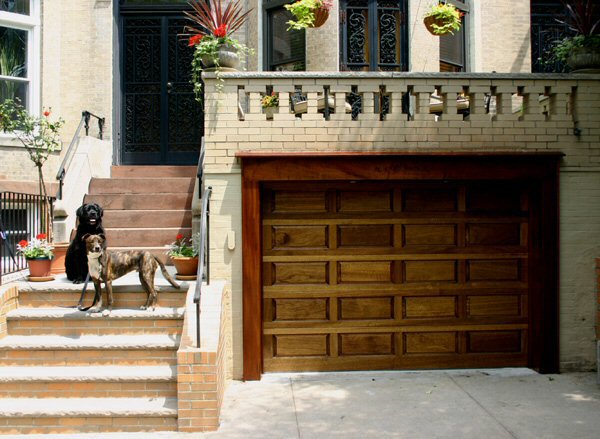 And as long as I’m soaking wet anyway, I might as well make the dogs share my day by giving them baths (no, not with the pressure washer. I’m obsessive/compulsive, not crazy). 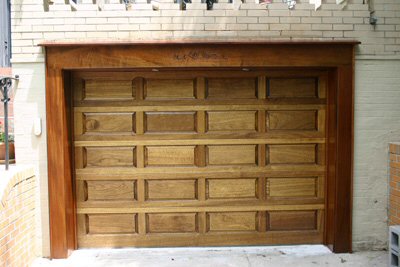 So now it’s Sunday morning. I took the dogs out for their walk, stopping to admire my spotless deck. But, wait. The brow over the mahogany garage door is also looking a little weather-worn. When I return I’ll just sand it a little and add another coat of spar varnish.

You know where this is heading. I sanded down the entire garage surround and refinished it, including new stain.

That was a bitch because I’d made the mistake of paste waxing it last year to see if that would protect the finish from UV (it didn’t). So I had to clean it all off with mineral spirits before and after sanding. 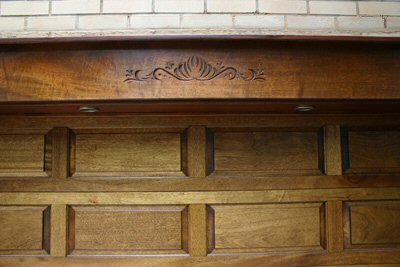 BTW, yes, I did a carving on the garage surround too. Yet another legacy mightaswell. Go ahead and laugh amongst yourselves.

So, it’s done. That’s how a simple little project turns into an entire weekend, and then some. I still need to add a couple of more coats of spar varnish to the brow. 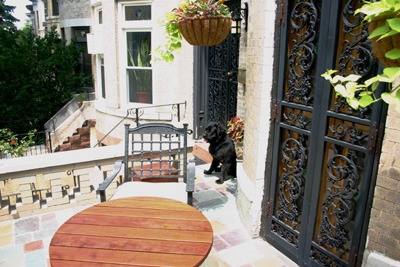 Anyway, finished. Except for that little mahogany box behind the chair. That’s the dedicated dog poop receptacle. And it’s looking a little weather-worn too. Maybe just a little sanding…