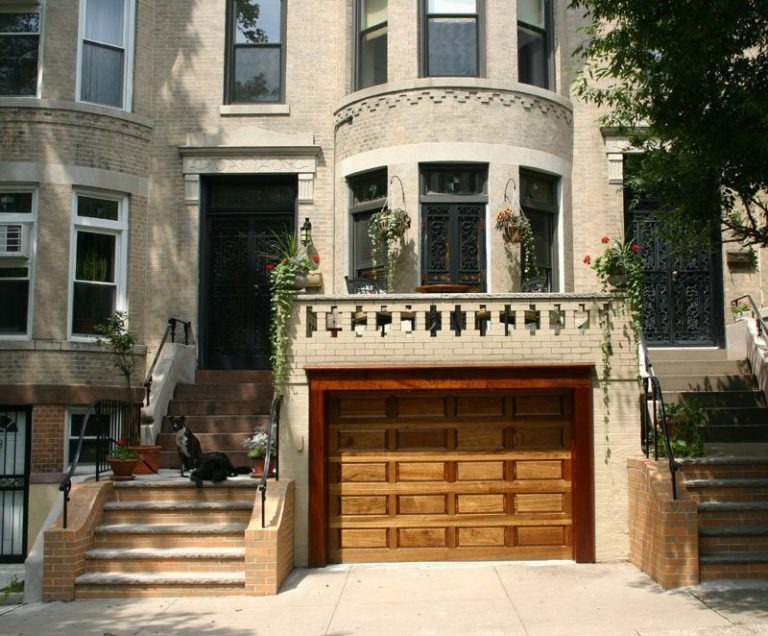 More old pictures of my house!

NYC is an old city, at least by US standards, and has a lot of old buildings. My previous dwelling was a loft on lower Broadway in Manhattan, in a converted paper goods factory. It was built in the 1870s and the factory allegedly made cardboard boxes for the military during WW1 and WW2 before going out of business in the mid-1970s. 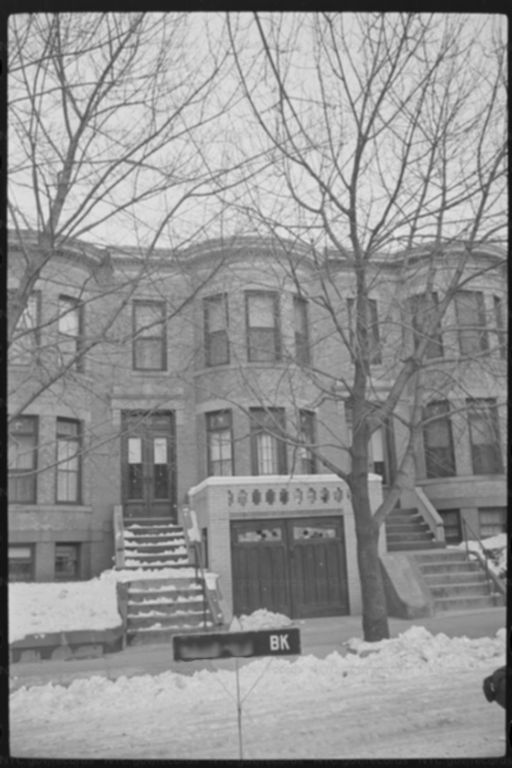 Because there are so many old buildings, people want to see what their residences looked like “back then”.  NYC’s Department of Records & Information Services, a/k/a DORIS, has a huge archive of old NYC photos including tax photos going back to the 1940s. One of NYC’s little secrets is that you can order a copy of a tax photo for your house suitable for framing for around $45. It’s my default Christmas gift for home-owning NYC friends. Warning though: the online ordering process is also pretty vintage.

Here’s a tax photo of my place.  It was given to me as a gift by some friends around the corner as a Happy Closing Day present when I moved in. It’s circa 1940.

This summer, as I was standing on the sidewalk talking with a neighbor, a nicely dressed couple, Dorothy and Alec, stopped their car and were staring at my next door neighbor’s house. He rolled down his window and said, “that was my grandparents’ house until the 1930s”.

He had spent a lot of time in the house when he was a little kid in the ’30s. Betsy took them on a tour of her place, much of which is still original, and you could tell he was having flashback moments as he recalled the things he used to do in the house and what the neighborhood used to look like. He told several cool stories about what it was like here during WW2, the Liberty ships jamming the harbor waiting to be loaded with fresh recruits and war materials at the Brooklyn Army Terminal, and the trench-coated G men on Second Avenue looking for German spies taking photographs of the troop deployments and ships in the harbor. 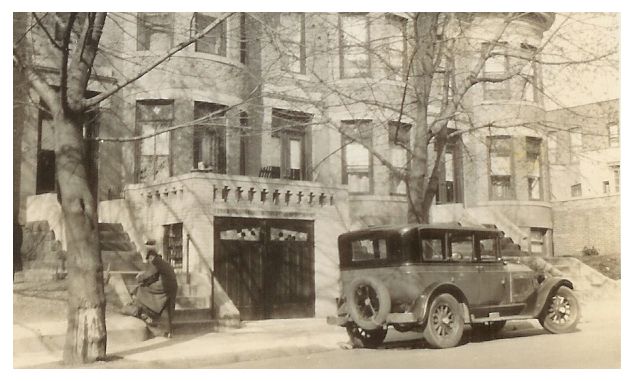 Dorothy and Alex sent me a photo of my house taken in 1936 (right).

This is so much more interesting than the tax photo! Was that a previous owner on the steps? That’s obviously the owner’s Model A(?) parked in the driveway. Classy!  And look at all that available street parking!

One curious feature is in both photos.  The house has a garage but there’s tree in the middle of the curb cut!  For at least five years, possibly longer. How did they even get a car into that garage?!  Were the homeowners dealing with a black hole of government bureaucracy trying to have that city-owned tree removed?

I know the garage was legally built.  In fact I have the Certificate of Occupancy that was issued after the city inspection of that garage in 1935. 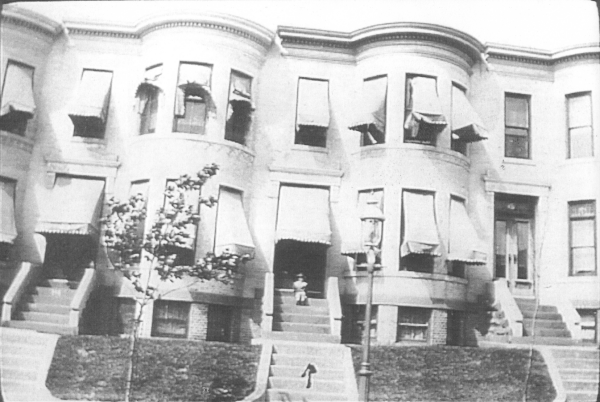 Last month, Dorothy and Alec sent Betsy another photo, this one of both of our houses shot in 1916, only a few years after they were built. Man, they look like very different places. According to a notation on the photograph, the little girl on the steps is Alec’s cousin who is 91 years old and still lives in Bay Ridge.

My house is the one on the left, with the small tree in front of it. I found my original CO which shows 1935 as the year that grassy mound of a front “yard” was removed and the garage was built.

I guess that window and door canopies must have been all the rage at the time. Then again, these houses get blasted by southern exposure and the photo predates residential air conditioning by several decades so it makes sense. 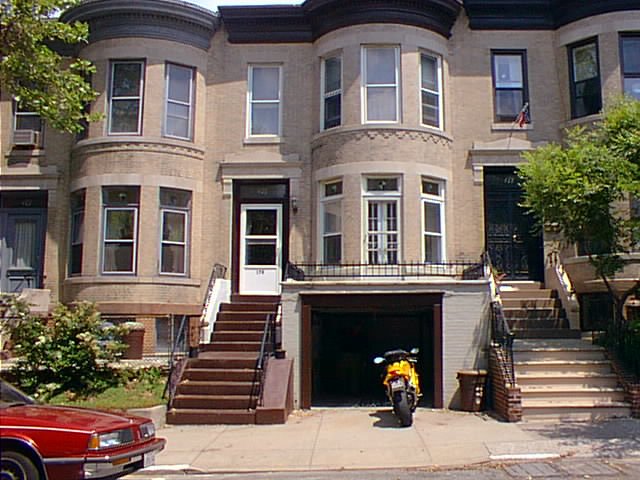 Anyway, for the sake of comparison, here’s a shot of the front of the house on inspection day, 1999. Sometime in the intervening years, a PO removed that brick balustrade on top of the garage and replaced those great leaded glass garage doors with a cheap vinyl piece of junk that was cracking from the UV. Also gone were the beveled glass oak entry doors. 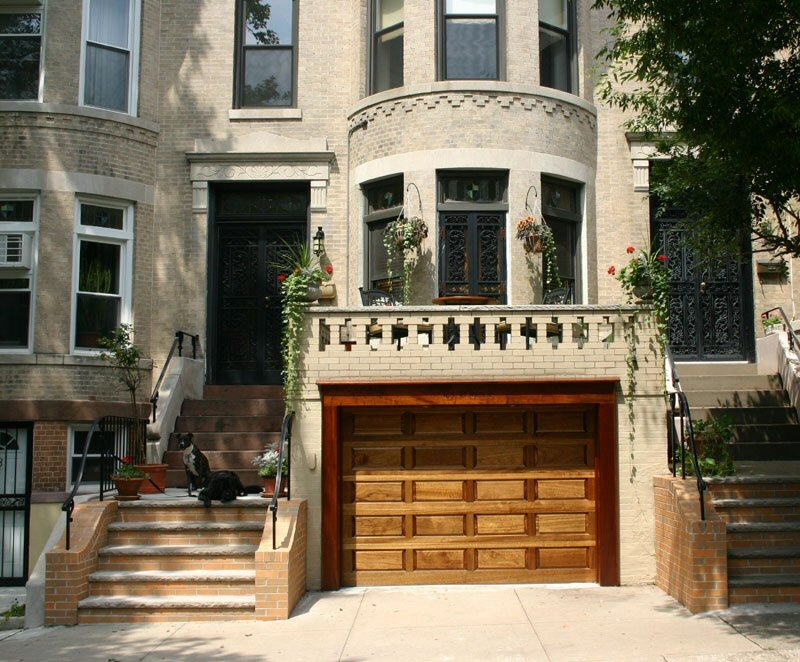 Here again is a shot of Brooklyn Row House today. Betsy’s and my lower concrete stairs were replaced in 2005 due to severe cracking. I also did a garage rehab because I hated the look of the old one. It’s maybe a little too slick and modern for the house now but I got carried away in my shop. Give it another 40 years and it’ll look original.

I wonder if fifty or sixty years from now my house will join some future home owner’s historical archive?