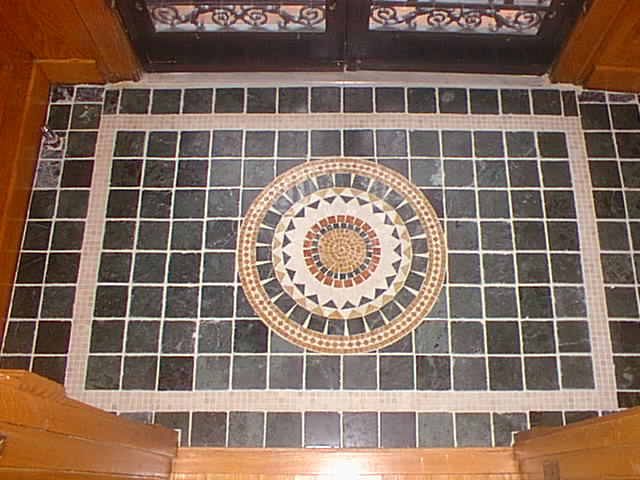 As I was just opening my eyes this morning I heard a steady hiss coming from downstairs. Anyone who’s got single pipe steam heat knows the sound, especially early in the morning when the boiler is working hard to warm the house from its overnight setback temperature.

That’s the sound of pressure from the steam displacing air inside the pipes. It’s normal. That’s what an air valve on a steam radiator is supposed to do. But if it’s loud enough that you can hear it a floor away, you’ve likely got a problem. It often means the valve is stuck open.

I went downstairs and saw that my glass exterior doors inside the mud room were completely fogged up, in fact dripping.

In the upper left corner, next to the wall, you’ll see a little metal device in the floor. That’s the main air valve for a three-inch pipe in the basement which feeds all the radiators at the front of the house. It was stuck open and venting steam in the tiny mudroom. Since that’s the largest air valve in the system it’s the worst one to have fail. I was lucky I didn’t oversleep. In another couple of hours I’d probably have warped woodwork to contend with.

What caused the valve to stick, who knows? One of the problems with single pipe steam heating is that when there’s no steam in the pipe or radiator, it’s filled with air. Water + air + iron = rust. That’s what usually causes an air valve to fail. Rust clogs the little float valve, wedging it open. In some cases, rust will stick the valve in a closed position, which creates another problem: no heat.

An air valve is a critical component in your steam heating system. If it’s not vented, steam can’t get through. Instead, the air will compress, equalize to the pressure of the steam and you’ll have a road block. In fact, that’s a good analogy so we’ll use it.

On a highway, some traffic exits are a single lane and some are two and even three lanes. That’s so there are no traffic slowdowns at heavily used exits. The same applies to air valves. Air valves come in six different sizes based on the size of the vent. The nomenclature is completely confusing but here it is, from smallest to largest:

Using a correctly sized air valve is important for balancing your heating system. Steam, like water, will follow the path of least resistance. In other words, if the radiators at the back of your house have large vents and are happily venting air and the radiators at the front of the house have smaller vents and are creating resistance, guess where the steam is going to go?

So which size vents go where? There are two rules of thumb:

In fact, air valves function somewhat like faucets, or what some people believe the radiator’s twist valve is supposed to be (it isn’t — that valve should either be full on or full off).

Usually, you’ll find that a #5 will suffice for radiators on the first floor and #6 for radiators on the second floor. If you have a cold room on the second floor, use a ‘C’ valve. If it’s a very large radiator, use a ‘D’. Air valves on steam feed pipes usually take the largest vent size, a #1. That’s the size of the valve that failed on me this morning.

It’s very trial and error. It took me an entire heating season to balance my system.

A final word of advice, and I can’t stress this enough: Don’t buy cheap air valves! Cheap air valves don’t last. They’re only good for balancing a system. Once you’ve done that, ditch them for quality air valves when they fail. A good air valve can cost $15 or more. Buy air valves at a real plumbing supplier too, not a box store.