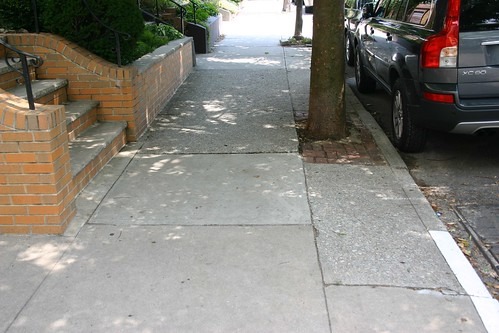 My doorbell rang this afternoon. It was my cheerful postman, Kevin, and he had a certified letter for me. Certified letters are almost always buzzkillers. The envelope said it was from NYC Dept of Transportation so I knew it wasn’t congratulations from Publishers Clearinghouse.

Kevin said that every house on the block, except one, got certified letters from DOT. What the hell, I’ve got nothing to be concerned about. My sidewalk and curb are in excellent condition. I signed for the letter and opened it up.

Inside was a Notice of Violation that my sidewalk had been inspected and was found to have a “trip hazard”. The notice said that I needed to replace ten square feet of sidewalk. There was a graphic indicating the general section of my sidewalk shown in the photo below.

In NYC — and I presume that this is the case in many large cities — the building owner is responsible for the maintenance of his sidewalk. If a sidewalk falls out of repair it’s the property owner’s job to repair it, just as it’s his job to keep it clean and clear of snow and ice.

However, enforcement has typically been limited to third party complaints, not proactive inspections. I’m told the city is named in tens thousands of predatory civil suits every year related to substandard sidewalks, some of them pretty funny… like the guy who tried to sue my neighbor for “loss of marital congress” after he allegedly tripped on a crack on the sidewalk and broke his pinkie finger. I swear I’m not making this up.

Last year around this time, an independent contractor was tearing up and replacing sidewalks all over the neighborhood. According to one of the affected homeowners, an inspector had run around the neighborhood tagging damaged sidewalks for repair. Certified letters were sent to homeowners with vague indications of the nature of the violation. They were given 45 days to either apply for a permit and get the job done by a licensed contractor or the city would do the job @ $9+ square foot and bill the homeowner.

The thing is, I walked those sidewalks several times a day with the dogs. While a few of them did have some issues with tree roots, most of the sidewalks that were replaced I remember as being in fine shape. At least, I never saw an issue with them. The entire process struck me at the time as being somewhat arbitrary, which is to say fishy. And now here we are again. 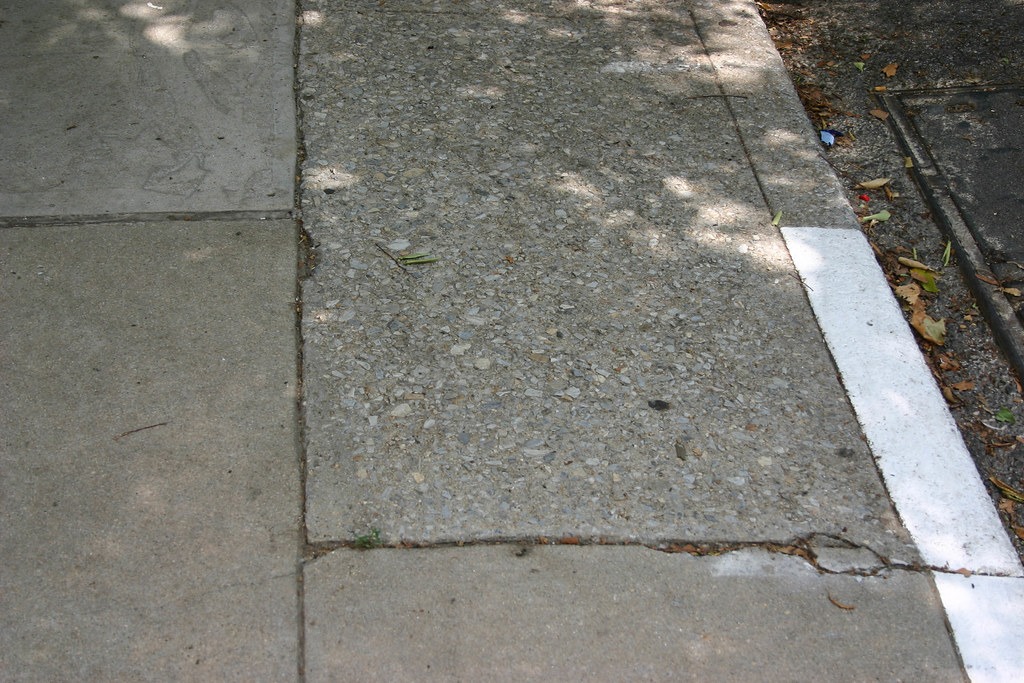 Can anyone spot this “trip hazard”? Bear in mind that my sidewalk is everything below that white painted curb cut on the right. The questionable piece of sidewalk is on the lower right, immediately adjacent to it t up to the first vertical seam. Let’s focus on that section of sidewalk and see if we can spot that dangerous “trip hazard”…

What I see is a somewhat ragged sidewalk seam with a small piece of broken concrete that’s not loose or in danger of falling out any time soon. Whatever, that’s not the noted violation anyway. If it was it would have been tagged with Defect Code #1: “broken”. Instead it indicates a Defect Code #3: “trip hazard”.

Is it the little protruding weed, left-center?

Whatever, if the city wants to fix it for $9/sf that’s kind of a no-brainer. A licensed sidewalk concrete contractor won’t touch a trivial job like this.

LATER: as it turned out, it wasn’t the crack that bothered the inspector. It was the mismatched concrete. The “flag” of concrete in question had too much exposed aggregate which the inspector deemed to be degradation from a bad repair job probably in the 1960s. It was replaced and since it was mostly on my neighbor’s property I wasn’t billed for it.