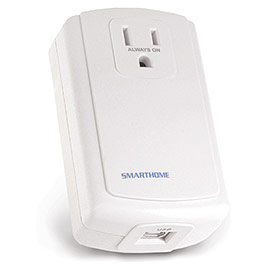 I had my first Insteon home automation device failure this week. Unfortunately, it happened to the brains of the “automation” part — the software/hardware combination that executes the timers that turn the lights on and off. Specifically, the culprit was the PowerLinc device that bridges my house to the USB port on my computer which runs the timers.

Here’s the little sucker. At 70 bucks, it’s not like changing a lightbulb. Okay, I was pissed about it, especially as it’s only a little over two years old. But, fact is, I was never happy with this automation set up. For one thing, it requires leaving a Windows box on 24/7 for the timers to work. And the HouseLinc software I was using must have some memory leaks in it because once I removed it from my computer it seemed to gain an extra half a processor.

What I really want is an Insteon driver for Linux/FreeBSD that would let me build my own timers in Perl, which I could run under Unix cron. That’s what I did with my former X10 automation layout, which was decidedly more hobbyist-friendly than Insteon but decidedly more flaky as well, which is why I got rid of it. I spent a couple of hours Googling for open source alternatives to no avail before winding up back at the SmartHome web site.

It was there I noticed a couple of new Insteon products. One was a relatively inexpensive home automation controller that runs from a smart phone. It got 4 out of 6 on my Coolness Meter but it was functionally less than I had with HouseLinc. True Geeks don’t downgrade. 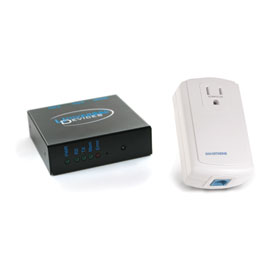 Then I saw the ISY99-i controller. Now THIS is what I’ve been looking for: a stand-alone controller that works like a web server and plugs into an UPnP router (hey, I’ve got one of those!)

With this device you can not only program all the devices in your system, you can have them appear on a protected web site. That means it will run on any smart phone too, not just the iPhone. From your cell phone you can program your Insteon house devices from your office, the bus or from Moscow. That’s almost 6 for 6 on the Geek-o-Meter.

So, sure, you can turn your lights on and off from a hundred miles away but what practical use is that? Almost none, but Insteon devices aren’t limited to light switches. You can also use it to control air conditioners, boilers, your DVR, the irrigation for your tomato plants, video cameras, the coffee pot and in fact control anything that works with an IR remote.

So I could (if I had kids), log into my password-protected web server, turn on some lights and watch the rug rats over net video. Or override the setback timer on my thermostat if I have to work late. Or reboot my servers. I’ll probably never use it for that but it’s fun knowing that I could.

One thing I do love about Insteon timers is that my “house” knows the time of day and my latitude and longitude so it takes care of turning on and off the lights for me. I didn’t realize how dependent I was on that until my PowerLinc failed, I looked out of my office door one night and saw that the house was completely dark. The next morning, I found the garage and basement lights still burning. I was used to having Houselinc do a precautionary kill of those lights every evening at midnight.

When the ISY99-i gets here I’ll post more about it, including I’m sure a good dose of complaining.