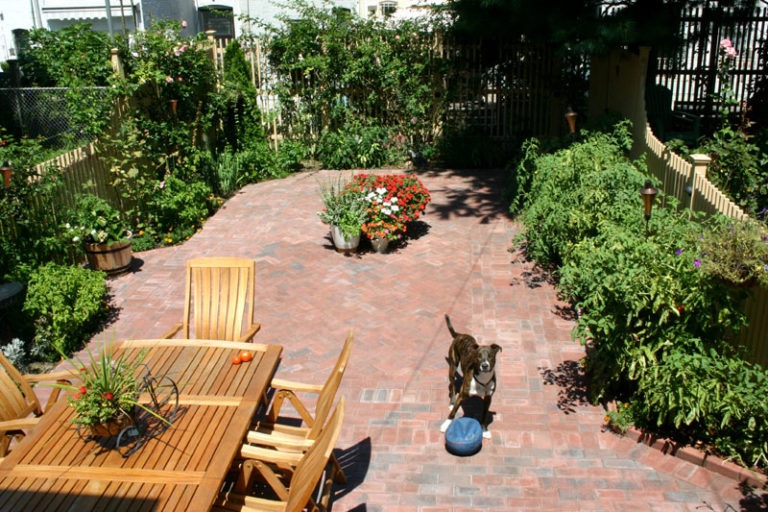 Odds and Ends, Excuses and Alibis

By now, I was supposed to have posted about the successful completion of my stained glass construction projects. Maybe because I was coming off that year-long second floor renovation I needed time to recharge before throwing myself into another marathon. Instead, I got obssessed with maintenance, humdrum projects and pontificating on the Old House Web forums. 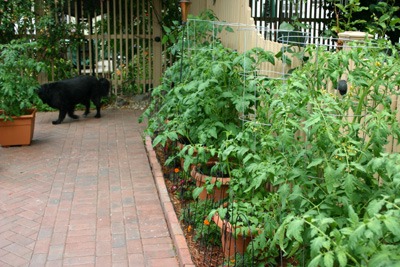 First up: the garden, or more specifically my nine hybrid tomato plants. I’ve had diminishing returns from my ‘maters the past couple of years. Last year, half the plants died shortly after flowering. So I decided to consult with the masters: the greybeard Italian gardeners in the neighborhood. They said that my soil was probably DOA and that nothing I could add to it now would fix that tomato bed. Just mix in some manure and let it steep for a year or two. So I put the tomatoes in planters this year.

Within two weeks I knew this was the way to go. With the rich, bagged topsoil the plants took off.

The black beast lurking in back is Jack, my newfie. He loves being outside but with his thick, jet black coat and natural body fat, he wilts in the sun. So he stays in the shade of the pine tree. 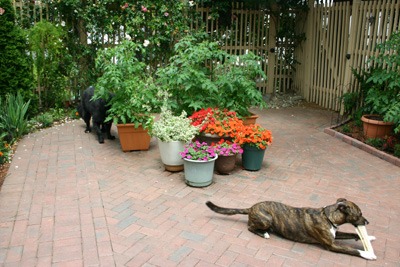 Another old-world trick revealed to me was to bury a dead fish with the plant. According to the Italians, a decaying fish has the best balance of organic nutrients needed by growing tomatoes.

With all the stray cats around here I figured that probably wasn’t a great idea so I did the next best thing. I bought a big bottle of fish emulsion.

That seems to be working great too. I haven’t had so much as a yellow leaf on any of these plants. And they’re flowering like crazy. Another horticultural contribution, this time from a Brit, is epsom salts. Epsom salt is magnesium sulfate, which is great for all flowering plants. Every two weeks, scatter one tablespoon per foot of height around the base of the tomato plant. For other plants, use one teaspoon.

Believe me, both work wonders. I gave my neighbor three of those same hybrids for her planters. She didn’t use the fish emulsion/epsom salt trick and her plants aren’t half as full as mine. 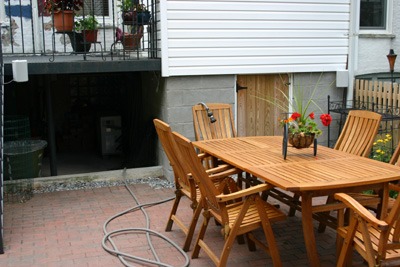 While I was at it I sanded and re-oiled my teak garden furniture. I do this every year on the first sunny spring day. After a long, cold winter it’s nice to be outside for any reason so it’s a good time to schedule tedious jobs like this, which I’d never do otherwise.

You can also see the two outdoor speakers I mounted in this story. It’s so nice to hang out in the back yard with XM’s “Deep Tracks”. 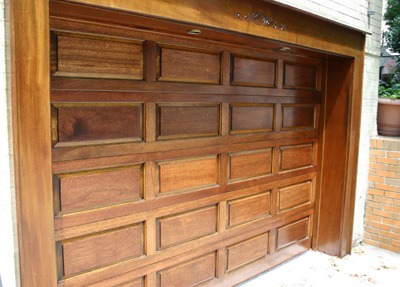 And on that note, another chore was stripping and refinishing the mahogany garage door I built and installed only three years ago. After all the work I put into that door and surround, it was a heartbreaker watching the spar varnish flake off.

But it was, and big time. I’m blaming the lousy Minwax Helmsman marine urethane so this time I refinished it with Cabot spar varish.

Right out of the can I knew this was better stuff. It smelled awful. The finish is also a lot nicer. It remains to be seen if it will work any better. If not, next time it’s Sikkens Cetol. 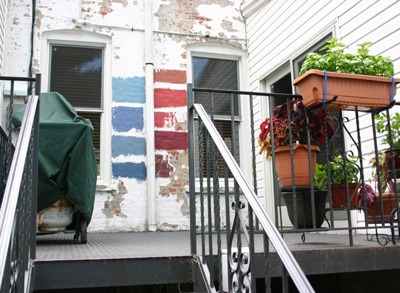 The next real project, which I won’t be doing, is painting the back of my house. You can see the color samples on the wall. I’ll be going with the second blue from the bottom. The wall has been pressure washed so it’s looking particularly funky now.

I would have painted it myself except that this north-facing wall gets beaten by winter winds and ice. Paint doesn’t survive long on this old, parged brick so I wanted to try a super-thick substance I’d read about from a company called Wallcoat. It comes with a 15 year warranty. But it’s only sold to franchised contractors so I signed a contract with a local Wallcoat contractor back in March.

I’m taking it easy this summer. Maybe I’ll get to the stained glass, maybe I won’t. Renovating an old house isn’t something that should feel like an obligation. It’s a stress reliever.

On that point, Doc Karen has always been horrified by my lifestyle and has been ragging on me for years to get a physical. She was sure I had everything from black lung to AADD to lyme disease. The last time I saw a doctor for anything was in 1990 when I broke my wrist so, yeah, I figured that 18 years was probably pushing it. So I got a physical. BP: 120/81, sugars: 100, PSA: normal, cholesterol: high-normal, lungs: good, heart: good, damn… I can’t match three numbers in lotto so I guess this is where my luck went. It’s definitely not something I can take credit for.