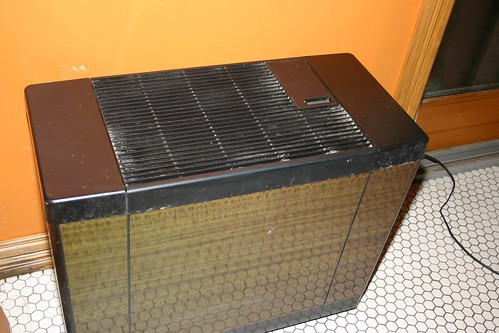 Some DIYer I turned out to be

During the heating season — from late October until April — I run a large humidifier 24/7. It’s something I’ve done since music school. I had a 115 year-old Czech flat-back double bass that didn’t like steam heat. By the time spring arrived I would have spent anywhere from $300 to $1000 at the luthier getting glue joints fixed, new cracks repaired, the sound post reset and so forth. Running a big honkin’ humidifier was a lot cheaper and the bonus was learning that it was healthier for people too.

The humidifier, a six gallon Bemis, is located in the kitchen extension where it’s close to water and where the noise is less annoying. When I walked into the kitchen to feed the dogs yesterday morning, something was missing. It was quiet. Normally that means the humidifier tanks need refilling, but I’d just done that the night before.

I checked the unit and there was no sign of power. I pulled out the heavy breakfront to get to the wall outlet, forgetting about large bottle of VSOP on top. It shattered on the floor, showering my pants in brandy. After a quick clean-up and clothing change, I checked the plug with the first thing I found: my cordless phone charger. There was no juice at the outlet. Or at the next one either. Hmmm, a blown breaker?

The basement breaker panel looked fine. Nothing tripped. Aha! That circuit is downstream of a GFI exterior outlet on the back porch. Sure enough, it had tripped. I reset the GFI and the circuit, and humidifier, popped back to life. I climbed the stairs to my office/mushroom cave, self-satisfied that I’d fixed a problem that would have driven a lesser man to call an electrician.

An hour later, I went back to the kitchen for a coffee refill and saw that the humidifier was dead again. Drat, that probably means a bad GFI. Oh well, I can handle that too. But when I reset the GFI this time, the circuit was still down. Huh?I mentally retraced the circuit and remembered that it also powered the outlets inside the unheated storage room under the kitchen extension, where there was…ta da… another GFI! But the likelihood of two GFIs on the same circuit randomly tripping on the same day is beneath statistical noise. There was going to be a larger problem and I knew I was going to find it in that storage room. 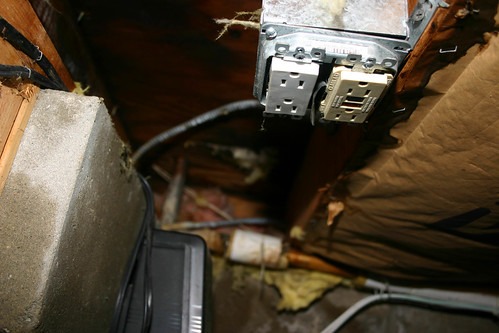 Depending on your POV, I was or wasn’t disappointed. As I reached into the dark room to turn on the pull chain light my hand brushed against the ceiling insulation, which was so heavy with moisture that it fell on my shoulder. It was a rain forest in there! As I pulled at the insulation I actually started a small waterfall. There was at least a quart of standing water above the insulation. I figured the GFI was telling me something so I ran inside to kill the breaker.

How did an electrical problem suddenly become a plumbing problem? There’s no source for moisture in the storage room except for… damn… the insulated steam radiator pipe for the kitchen extension’s baseboard radiator. I fished around for something like a split pipe but didn’t see anything. So I pushed the thermostat to 80 degrees and started looking for a leak, starting from that baseboard radiator.

It didn’t take long to find it. Water was spitting out from between the threads of the 1-1/4″ steam valve and the copper threaded nipple. Condensate — the cooled steam — was flowing down the outside of the pipe into the extension. I’ve never seen this before. After ten years, that joint should be so packed with sediment that you would need dynamite to loosen it. 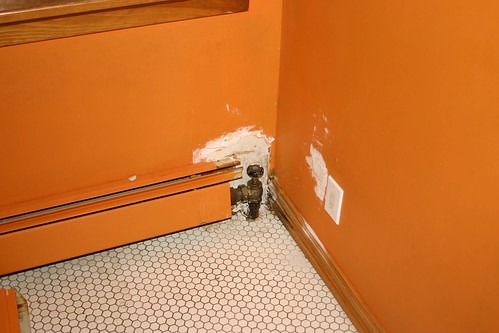 I watched the geezer plumber who installed that radiator. I was curious about his method of preparing the threads using string instead of teflon tape or pipe dope. He bragged that this was the old school way, the subtext being that it was the best way. No shortcuts here, boyo.

Let me stop and post one of my ad hoc rules of DIY: always assume the worst case. If you know you can’t handle the worst case, call a pro. My worst case here was that there was some kind of galvanic issue with the valve and the copper, that the metal was “rotting” and that I might have to replace several feet of pipe, including some tricky soldering in close proximity to wiring and flammable framing.

Time to call Richie at Sessa Plumbing again. If he burns the house down, he’s licensed and bonded. I’m not.

Despite his jammed schedule, Richie showed up this afternoon. He too was curious about that leak. It’s something that shouldn’t happen. He removed the baseboard cover, detached the baseboard’s union and it was obvious what the problem was.

My “old school plumber” must have gotten distracted by his liquid lunch because the valve wasn’t even hand-tight on the threaded nipple. In fact, it was so loose it was rocking back and forth. And there was no string in those threads. So much for “old school plumbing”. Richie cleaned the threads, wrapped them in “new school” teflon tape, reattached the valve and handed me a bill for $89 — one I richly deserved for being such a plumbing wimp. I may have to send my worst-case rules back to committee for revision.

On the other hand, I’ve got plenty to do fixing the saturated drywall and insulation and repairing the mess inside the storage shed. I started the plastering tonight. I removed the damaged drywall, replacing it with 1/2″ sheetrock scraps. I lucked out that this happened in a corner because there’s a corner block and sill plate to fasten the scraps to. Over that went a sloppy skim coat of plaster. I don’t care what this looks like. When the radiator cover is replaced it will be out of sight, hopefully forever.

A little paint and we’ll be done — at least until I change the kitchen color scheme again. The more I look at this orange the more I wonder if I had a mini-stroke in the paint store that day.