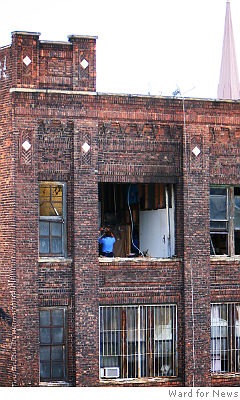 The High Price for Cheap Rent

On a nearby street, a line of ugly, cheaply built, 1980s-vintage row houses stand on a plot of land where there was once a neglected old Victorian. The six houses share a communal front “yard” — a quarter-acre concrete pad that gives the place all the charm of a New Jersey strip mall. To complete that grim visual, cars are illegally parked on it, usually double wide, often obstructing the sidewalk.

In fact, there are more cars than one would expect from six single-family homes. A couple of months ago, I deduced why that was when I saw a small “For Rent” sign hanging from the railing in front of one of those row houses. The answer: because they’ve also got illegal apartments. A visit to the Department of Buildings’ information system confirmed that all of those houses lack a Certificate of Occupancy to permit rental apartments.

According to a recent NY Daily News article, with the economy still in the tank, some home owners are taking advantage of the downturn to make a little off-the-books income. 20,000 complaints are filed about illegal apartments every year in NYC. But the Buildings Dept lacks the manpower to inspect them all. Half of those complaints are closed without inspection because inspectors only make two attempts to visit the premises. Like UPS, if they ring the bell twice and nobody’s home both times, their job is over.

That’s led to sleazy landlords leveraging that policy to create some truly dangerous conditions, like an illegal day care center in Queens that lacks, among other things, fire exits. According to the Daily News, DOB inspectors have been unable to gain entrance to it for nine years! Here’s a thought, DOB: have one of your inspectors enter the daycare center as a prospective client.

The issue with illegal apartment conversions isn’t just that it makes a neighborhood uglier or cheats the city out of tax revenue. They’re dangerous as well. Last week, fire tore through the shabby bandit construction of an illegal conversion in Woodside, Queens killing three Bangladeshi immigrants.

Landlords who do these conversions know they’re illegal so the construction is invariably illegal as well. It’s not uncommon to find entire apartments wired with extension cords stapled to the wall and bathrooms plumbed with garden hoses. And fire and safety codes? I’ve seen illegal apartments that didn’t even have windows, let alone fire egresses.

Often the people who rent these firetraps are the people who can least afford to complain about them: illegal aliens. In other words, those 20,000 complaints only scratch the surface of this problem. This is bad enough, but slimy illegal landlords sometimes pack five or ten people into a two bedroom apartment and charge each of them. A landlord in Sunset Park, Brooklyn was busted with 12 undocumented tenants in a rat-infested illegal basement apartment. Each tenant paid him $100/week, or almost $5000 month.

In the interest of fair and balanced reporting, I spent a lot of years in illegal residential lofts. My last one was a paper bag factory that I converted to a (very) large apartment and recording studio. I was actually very conscientious about following building and fire codes right down to the steel studs and sprinklers, even though I never had a single permit for it. I couldn’t get one anyway because the building wasn’t zoned for residential use.

However, I built the loft for me, not for a black market income. My first loft was illegal as well but it came with a bedroom courtesy of the landlord and $1800 in key money. It wasn’t until I took possession of the place that I found that the fabric covered walls weren’t concealing unfinished drywall but sheets of corrugated cardboard stapled to 1x2s. To keep the cardboard from collapsing, the walls were stuffed with crushed newspaper. Then zip cord was hot glued to the fabric to bring electrical into the room.

Perhaps it was good luck that only a few weeks later I got a visit from the friendly NYC fire inspector, who freaked out and made me tear that room down while he watched. Given the shabby construction, that took all of ten minutes using just my bare hands.