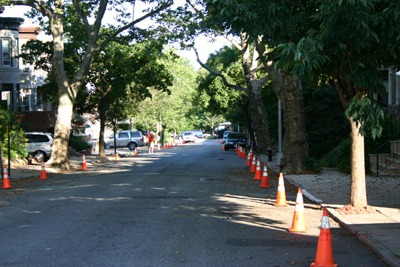 Last year, NYC DOT repaved several Brooklyn avenues. Last month, they began ripping up some cross streets, mine included. Even though my street was in good condition, people who have lived on the block for 40 years can’t remember the last it was repaved. I figured this might make a good photo archive moment for my planned neighborhood blog. 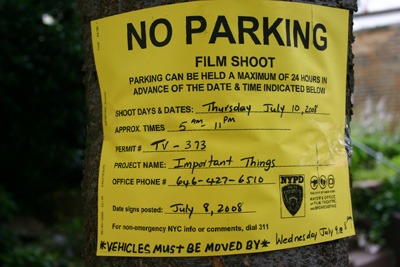 When I saw the yellow signs pop up all over the street I thought it was going to be yet another annoying film shoot. Over the past couple of years Brooklyn has gotten to be a hot location with Hollywood.

You might even see me in the background of an Ashton Kutcher/Cameron Diaz flick, “What Happens In Vegas”, which was shot earlier this spring in the park down the block. They wanted someone walking dogs so the PA pulled me out of the crowd of rubbernecks and told me to walk slowly and not look at the camera. I obeyed but Auggie became obsessed with a squirrel and caused a scene so we probably got left for dead on the cutting room floor. 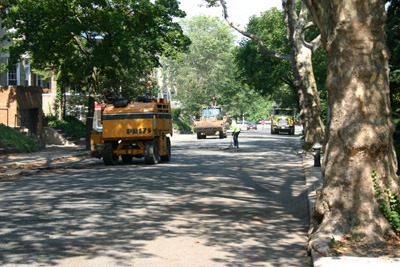 Down went the orange cones that evening and in came the tow trucks at 8am on the dot. Anyone unlucky enough to have missed seeing those signs planted the day before was probably going to spend the next couple of hours hunting for his car. DOT tow trucks haul them off to the first legal parking space they can find, sometimes several blocks away. 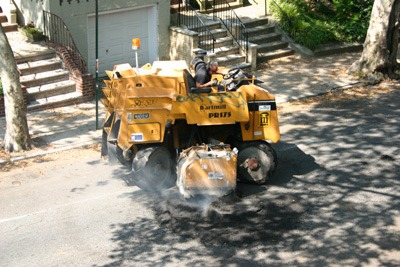 The show begins and it was like a precision armored assault. There was a method to what looked like mechanical chaos. Jackhammers and specialized vehicles began prep work for the big beast waiting at the bottom of the street.

This was one of those bizarre machines. It has a lethal looking drum with tungsten teeth sticking out its side. Its job is to rip up the pavement around objects like steel gratings and manhole covers that would damage the larger pavement shredder. The driver was obviously no rookie by the way he flew around this manhole. It looked like he was doing a donut. 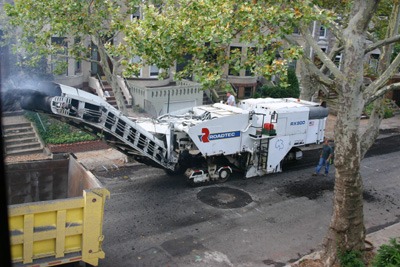 A few minutes later, this hulking machine showed up looking like a cross between a tank and a locomotive. This is the pavement shredder. It rips through an eight foot wide path of asphalt and concrete, spitting the remains into a dump truck.

The thing makes a deafening noise so the drivers communicate with each other using air horns and spotters. You can see the heat it generates from the smoldering asphalt at the end of the chute. It must be challenging driving this machine because the operator not only has to watch where he’s cutting but he has to keep another eye on that articulating conveyor belt so the truck’s container, which fills up quickly, doesn’t overflow. I’m told that all this waste is separated and recycled into new paving. 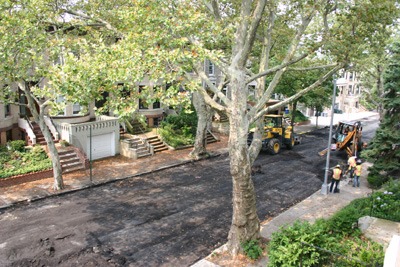 Other machinery trails behind the shredder, mostly scooping up loose asphalt, breaking up any chunks too large to get tossed in the truck and laying down temporary asphalt fill around any deep holes. That’s because the street needs to be reopened for traffic ASAP. 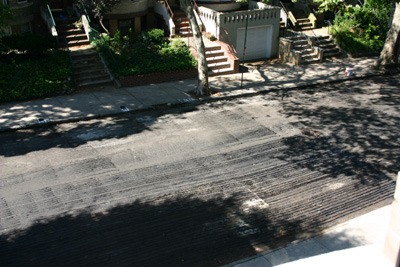 You need to drive carefully on a street in this condition but some people aren’t bright enough to realize it. A couple of nights later, I watched a Nissan with low-profile tires and a boombox moron at the wheel rip parts off the bottom of his car by driving too fast over a manhole cover. 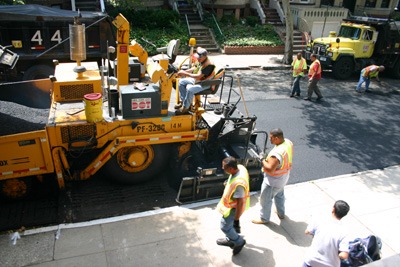 Three weeks later, the signs went up again and a new set of strange machines arrived. I was awakened at 6:45am by a bullhorn warning that any cars left on the block were being towed in fifteen minutes. By 7:05am, about a half dozen forgotten cars had disappeared. Then the street was swept by a street cleaner on steroids. Following this was a tanker truck that sprayed parallel rows of very sticky oil on the surface. This was followed by a crew of guys spraying some kind of release agent on the manhole covers.

Then the main act arrived: the pavement spreader. This machine has an articulated hopper on front which is fed by a series of large dump trucks full of hot, steaming asphalt. It latches on to the back wheels of the truck and pushes it while laying down a smooth bed behind it. The air was so thick with the smell of hot oil that you can actually feel it on your skin. 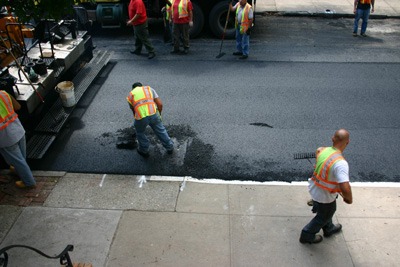 The crew immediately got to work cleaning this sticky stuff off the manhole covers and curbs before it sets. The paint marks on the sidewalk tell them where those covers are buried. It’s hot, smelly, back-breaking work so these guys stop about every 30 minutes for a rehydration break. Unfortunately, a couple of them must have taken a break on my front stoop because they left oily boot treadmarks on the limestone steps. It took a half hour with a citrus cleaner and a pressure washer to get that crap off. 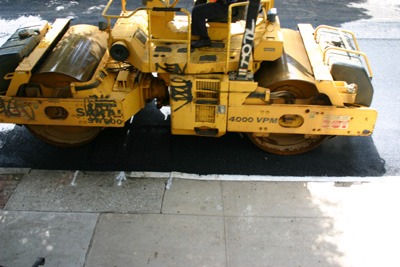 The finale was the noisiest machine of them all, a vibrating roller. This vehicle literally shook the house. I was amazed how precise the driver was though. This monster could pulverize a cement curb on contact but he managed to compact the asphalt within a half-inch of its edge. And he did while waving to the dogs.

A couple of houses suffered water pipe breaks under the street, probably thanks to these machines. 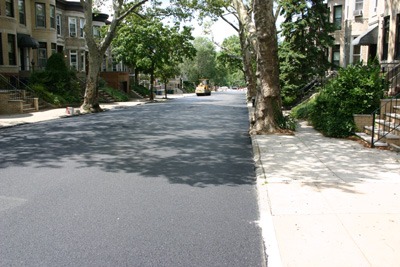 All done. Just one lone roller doing some final cosmetic touches to the pavement before departing. Three hours after starting, only the shiny new street and the thick smell of asphalt was left to show they were even there. Jack and Auggie christened it just before the street was reopened to traffic.

Anyway, you can have your Zambonis and Porsches. I wanna drive that pavement shredder!