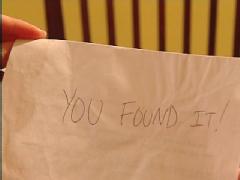 Flash forward four years. The home’s new owners are the Browns, who purchased the Whitten Street house for $75,000.

Jason and Kerri Brown of Greenville found a secret room in their home behind a bookcase, and what was inside was a nightmare beyond their wildest dreams.

A secret room! Who hasn’t had fantasies of finding a secret room in their old house? But for Kerri Brown, it was about the worst nightmare a home owner could face.

The secret room in the old mill home on Whitten Street in Greenville’s Dunean section contained a handwritten letter from the previous owner titled, “You Found It!”

“Hello. If you’re reading this, then you found the secret room. I owned this house for a short while and it was discovered to have a serious mold problem. One that actually made my children very sick to the point that we had to move out,” Kerri Brown read from the letter.

Leventis and his family were the first to discover the horrible secret of Number 6 Whitten Street. There is no indication the previous owner was aware of any mold.

According to the note, the mold problem was so severe that it made the whole Leventis family sick.

The Leventises did the only thing they believed they could do. With no money in their savings to have the mold removed, they stopped paying the mortgage and let the home go into foreclosure.

“I’ve never seen my kids that sick. And it was scary,” Tricia Leventis said in tears.

According to Tricia, she and their two young daughters became desperately ill, and said doctors told them to leave the home immediately.

“It was adamant. Absolutely, get out,” Leventis said. “It was to the point where my youngest was so sick, she was unable to hold any nutrition, nothing was working, she couldn’t breathe.”

The Browns subsequently bought the home from the Leventis’ bank.

So was George Leventis a cad or something of a hero? According to Leventis, he knew the bank would re-sell his house and he wanted to be sure the future owners knew about the mold. Leventis said what better way to warn them than to leave a note hidden from plain view.

“I put it in the room because I didn’t want anyone to find it if it was left out in the house. I figured if someone else who had another interest or a stake in the house found it, they would just throw it away or they wouldn’t tell anyone,” Leventis said.

The Browns say that is exactly what happened, and say if not for the note, their child may have become sick as well.

“I’m very thankful he left the note. In my opinion, there’s a possibility he could have saved Megan’s life,” Kerri Brown said.

A mold engineering company was hired to assess the damage and it found elevated-levels of several types of mold, including Aspergillus, Basidiospores, Chaetomiu, Curvularia, Stachybotrys and Torula. According to the Browns, the cost of removing the mold exceeded the value of the home.

Lawsuits are, of course, flying although Fannie Mae agreed to buy back the house from the Browns at its sale price and has subsequently been dropped from the lawsuit.