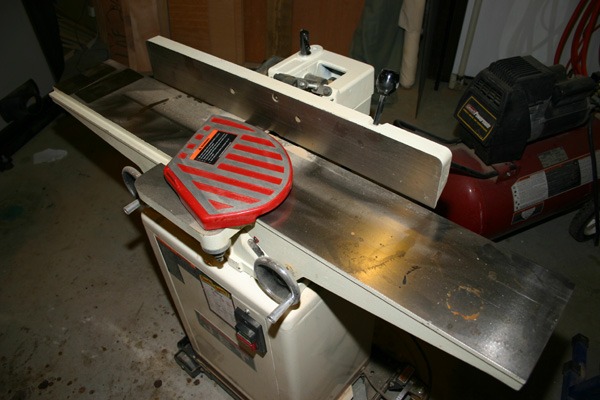 Got a shop? You need this stuff!

Last weekend, my boss and I made the trek to the annual NJ Woodworking Show. Jeb has a pretty nice woodworking shop but his passion is car and motorcycle restoration. He’s done several old bikes — Velocettes and Moto Guzzis — but his current project is a 1955 Land Rover. The Rover looked like it had been parked at the bottom of a river for the last fifty years but after two years he’s nearing paint and finish, which means he needed supplies, which means we both needed to hit the show.

I’ve been looking for a decent steel tool deck cleaner for a couple of years. Nothing I’ve tried worked much better than WD40, #00 steel wool and carnuba wax. Jeb told me that he’d had good results with Boeshield and, sure enough, we found it at the show. It’s expensive but it was worth a try.

Boeshield was developed by Boeing for cleaning metal airplane shells. It’s actually a family of specialized products but the T9 aerosol is the centerpiece. It’s like a super deluxe WD40 with an incorporated wax for longer protection.

If you don’t have machined steel deck tools you probably don’t know how vulnerable they are to moisture and stains. In extreme cases, the raw steel can actually get pitted from chemicals as mild as simple table sugar. My Delta Unisaw and Jet jointer were in bad shape. 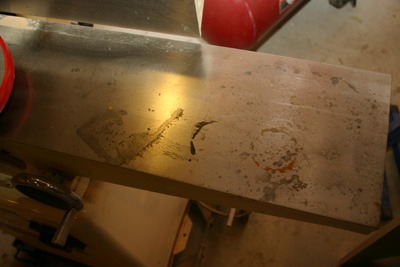 Let’s look a little closer. What the hell happened to this thing??

I know what a couple of those stains are. One was Karen’s sweating Coke can (after I told her to keep it off the tools… do I really need to provide drink coasters in my shop?) And several off those stains were water drips from the overhead coolant lines to the upstairs split-unit air conditioners. I don’t what that big stain to the left is. All I know was that WD40 didn’t get rid of it. 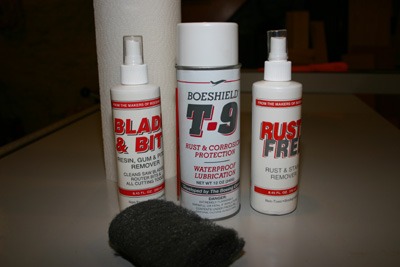 The spray can is T9. That goes on last. Up first was the gum and tar remover. Spray, let it sit for 60 seconds, then scrub with #00 steel wool and wipe off with paper towels. Next was the rust and stain remover. As soon as I sprayed it I recognized the smell: phosphoric acid. That removed most of the stains, although it took three passes. Then it’s sprayed with T9 and wiped down.

Success! Well, not quite. Fifteen minutes later the deck felt like it was covered in sticky old paste wax. I dug at it with my fingernail and that’s exactly what it was. Old wax. Boeshield didn’t do a very good job of removing that old wax. It simply suspended itself in the various solutions and then dried. Drat. 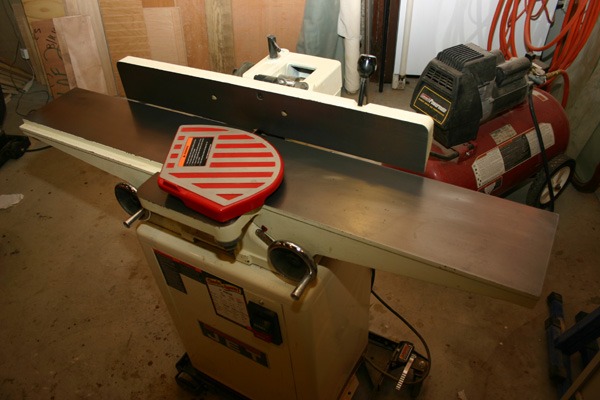 A wipe down with mineral spirits fixed that. In Boeshield’s defense, there must have been 20 layers of carnuba wax on that deck. You really need a petroleum solvent to get it off. Anyway, after an additional treatment with T9 here was the result.

I haven’t decided whether or not I should wax it too. I think I’ll leave it as is for now to see how well Boeshield works as protection.

Afterwards, I did my table saw too. That was even tougher because an idiot had used the saw as an assembly table to glue fabric to some window shades. The spray glue soaked through and discolored the steel. I was that idiot, by the way.

Anyway, it’s all pretty now. But it reminds me of an entry from the Tyromaniac’s Notebook that I’d like to pass along: DO NOT use Naval Jelly to remove rust stains from a steel table saw deck. The stuff is way too caustic. Those were the hardest stains to remove.

PS: I realize that I’ve been real lax about updating my blog since December. I even got a letter from one of the blog reflectors asking me if I’d abandoned BrooklynRowHouse. I haven’t. I’ve just been neck deep in a software project for the Children’s Health Fund. I’ll be reporting on the upcoming stained glass projects soon.