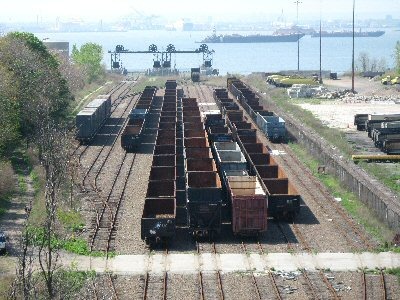 This would make an awesome train set.

My older brother was a model train buff. I always liked the real thing. As a little kid growing up in Japan, my friends and I used to sneak across the mulberry fields and sit by the train tracks to Yokohama. But the local koban police usually caught us and hauled us back home with a stern warning to our parents never to allow it again. That never deterred us. No question about it, we were American brats. 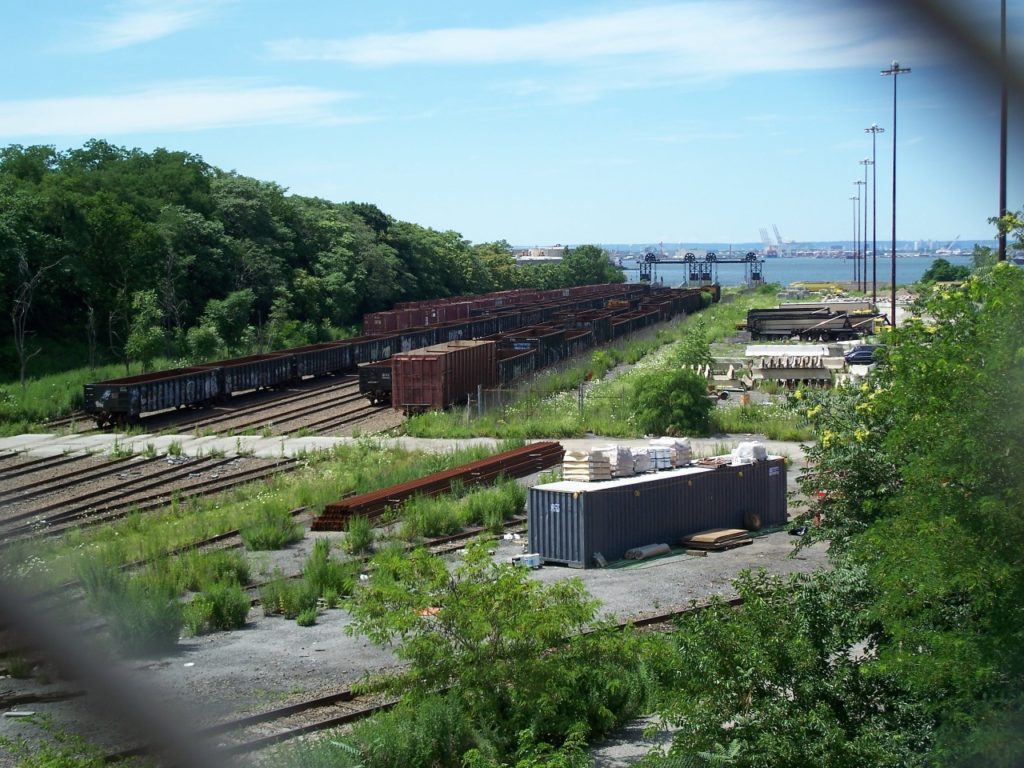 Bay Ridge is in south Brooklyn, on lower New York Harbor. One the benefits of living here is dozing off to fog horns and big ship engines in the harbor. But I was always curious about one horn I’d hear occasionally that sounded like a locomotive. It was months before I realized that I had a small rail yard only three blocks away. In my defense, you have to climb up on a cement wall on a bridge overpass to get this shot.

This yard is between me and the Brooklyn Army Terminal. During WW2, 85% of the soldiers bound for Europe arrived on trains in this rail yard before being processed at BAT and boarding ships in the harbor beyond. This was back when there was a Hudson River rail crossing at Poughkeepsie. It burned down in 1974, effectively making an orphan of Brooklyn’s rail access to the outside world. 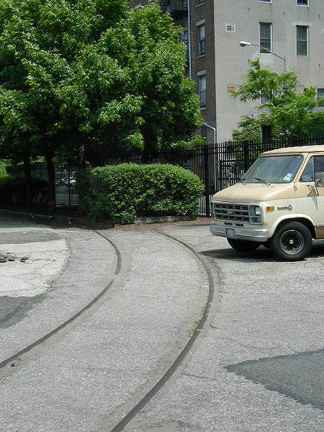 However, you still see plenty of evidence of those old railroads today, like this one in Brooklyn Heights. It’s from the old New York Dock Railway, parts of which still operate today under the merged NY Cross Harbor Railroad (NYCH).

There are Brooklyn railroad buffs who know lots more about this stuff than I do so I hope I don’t misspeak. My understanding is that Brooklyn railroads had an inherent handicap. Brooklyn is located on an island (Long Island) and there are no rail water crossings here. To get a box car from Bay Ridge to the rail yards across the harbor in New Jersey it had to travel north all the way to Poughkeepsie to cross the Hudson River, then back down again. Because of the myriad rail yards in between, the trip could take as long as five days. By the way, the Jersey rail yard can be seen across the harbor in the above photo.

How primitive, right? Well today it’s actually much worse than it was a hundred years ago. A freight train bound for Brooklyn from New Jersey has to travel 280 miles to go 2 miles. It’s known as the Selkirk Hurdle. Progress.

As a result, the Cross Harbor Railroad was born.

In the first photo you’ll see a couple of large, iron contraptions beyond the freight cars at the water’s edge. Those are float bridges and this was their solution. Freight cars coming from New Jersey or Long Island would be loaded on large barges and tugs would pull them across the harbor. It cut a five day trip down to a few hours, albeit at the cost of lots of barge trips.

There were several of these car float docks up and down the Brooklyn waterfront. I’m told that this one at 65th Street was renovated in 1999. It’s still in operation. 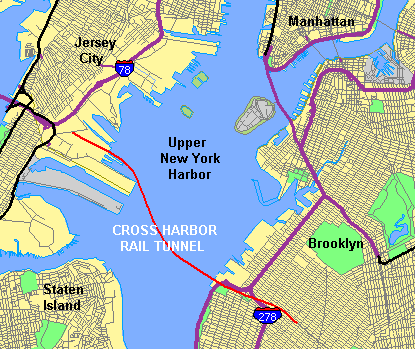 There’s a tunnel under Atlantic Ave in Cobble Hill which is open for public tours. The tunnel leads to an old float dock in Red Hook. You start the tour by climbing down a man hole on Atlantic Avenue.

In 2000, the neighborhood learned that the city was in near-final stages of considering to think about contemplating a freight tunnel from 65th Street, where the current rail yard is located, to New Jersey. It’s actually been on our congressman’s (Jerry Nadler) agenda for 35 years. It would be called the Cross-Harbor Rail Tunnel. The local entrance would actually be about a mile east of here.

Bloomberg killed the idea as too costly shortly after he took office but he’s more recently indicated a willingness to review the plan again. At a cost estimated to be as high as $10 billion by the time it’s completed, I think it’s safe to say it will never get off, or under, the ground. It looks like Brooklyn is destined never to have a thriving railroad and its highways will remain clogged with trucks until they collapse. The impetus behind the tunnel wasn’t so much to relieve Brooklyn’s truck traffic but Manhattan’s and the strained bridges and tunnels. But it’s still a good investment. EDC estimates that it costs businesses $2.5 billion/year to send freight by trucks to NYC and Long Island.

But I digress. What’s interesting is the existing Cross Harbor Rail Yard just north of the Brooklyn Army Terminal. 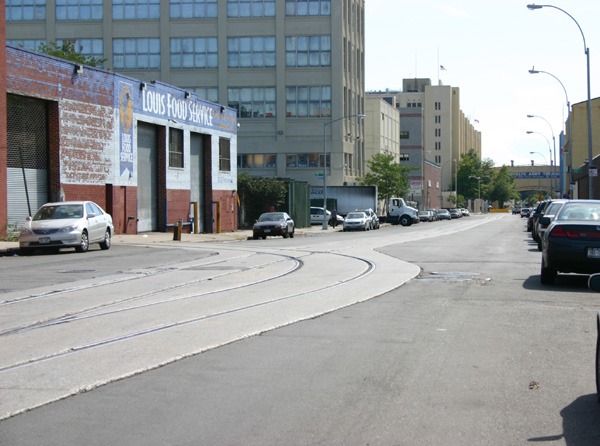 These are the First Avenue tracks which trains must take to get from the 65th rail yard to the NYCH rail yard about about a half mile north. The tracks, which are still in use, take trains through the Brooklyn Army Terminal, which you can see in the distance. Many of the old factories on First Avenue built spurs for their own freight. For industry, these trains were the UPS of its day. 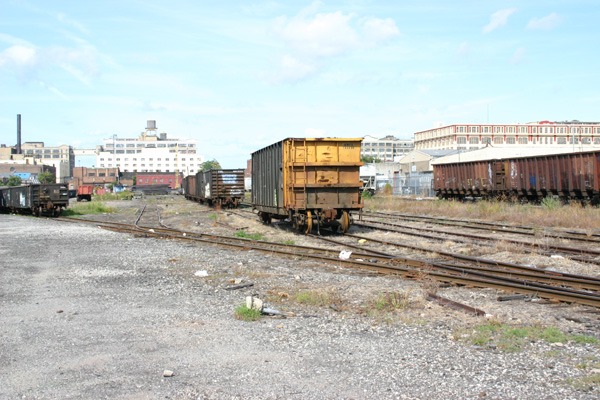 This is the Cross Harbor Railroad yard. It looks pretty beat but it’s still in limited operation. For how much longer, who knows? With retail builders eying this area for massive development, it may not be here much longer.

It’s only lightly used these days and it covers many, many acres.  It’s only a matter of time before a developer gets its hands on it for a housing development, stadium, corporate park, or perhaps all three. 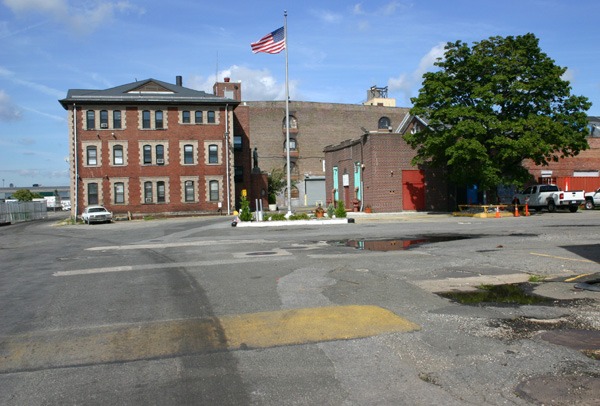 Tucked away between First Avenue and the harbor, in an area I wasn’t supposed to be in, is the Bush Terminal operations building. Bush Terminal, like the rail yard, may also fall soon but for now it still manages this large complex of turn-of-the-century industrial buildings as well as the rail yard.

If you’re interested, two other web sites did a much better job of photo-documenting this rail yard than I ever could: