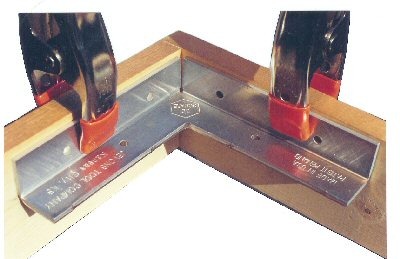 Tool Show Post Mortem: The Good, the Bad, the Ugly

I’m glad the Somerset Tool Show moved back it to the Exhibit Center because it was suffering at the Ramapo convention center. There were lots of new vendors this year, and lots of new tools.

My primary misson however was finding a router bit to cut the bolection mouldings for the wainscotting in my bedroom reno. The router bit yodas I was counting on for enlightenment were no help. One guy even told me I needed a shaper to get that profile. He must have noticed me looking at him like he had two heads because he followed up with, “…but maybe not.”

So I was forced to do hard forensics. After digging through hundreds of bit profiles, I found what I needed at Woodside. Know what? There’s nothing special about a bolection moulding. It’s just a deep base cap moulding with an “aftermarket” 3/8″ rabbet. Doh! Why couldn’t I have seen this before?? I bought one and ran a test cut on my router table. It works. Now I have to knock off about 300 linear feet of it.

The tool show usually has a fair amount of vendors selling “miracle” tools which are often little more than homemade jigs constructed from acrylic plastic or billet aluminum. Two bucks worth of material selling for fifty dollars. Who would pay for such things? Probably the same people who buy miracle spark plugs and gasoline additives at car shows.

Jevon 3D Square I spotted one potential huckster two minutes after I got there. He was selling what looked like standard angle iron (albeit made from aluminum) for squaring cabinets during assembly. At first I was amused at the interest he was getting from the crowd until I realized what a brilliantly simple idea it was. Anyone who has dry assembled a cabinet knows what a bitch it is to get the pieces square and to keep them there. Bar clamps usually torque the carcass out of square. Worst case, the whole assembly falls apart just as you’re installing the last panel.

What’s special about these innocuous brackets is that, unlike stock angle iron, they’re dead square to a tolerance of .002″. I checked them with an Incra square just to be sure. They also have ears on them which work with spring clamps. Finally, with the aluminum being 3/16″ thick it gives the perfect clearance for dry fitting a stained glass or floating panel in a frame before assembling it. So I bought eight of them. I also bought sixteen 2″ spring clamps at 99 cents each from Peachtree. 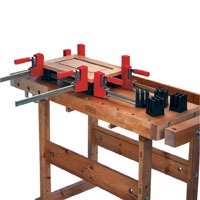 I was also in the market for some long clamps and ran across this nifty product from Bessey called a K-Body Clamp. Besides functioning as a standard bar clamp, they’re excellent as a jig for building dead-square cabinet doors and window and picture frames. Tightening/loosening the diagonal corner clamps pulls the object into square while also elevating it above the assembly table so the piece doesn’t rack. They can also work as a spreader. This was my big purchase at the show.

Another questionable product was stainless steel sandpaper. The manufacturer claims that it has 30x the life of a standard 5″ sanding disk. But it also costs about 50x more.

All in all, it was a great show.

Now the Ugly. With all these purchases, I was lugging around a lot of weight and the exhibit hall doesn’t have lockers nor even an attended coat room in which to park your stash. So the exhibitors are usually pretty accommodating about letting you stash your packages with them for pick up before you leave. I had assembled all my bags into one large blue plastic bag and left it with the Peachtree cashier, along with my (very heavy) K-Body clamps. When I returned to pick them up, Joyce offered to carry the big blue bag back to the car while I hauled the clamps. I warned her that the bag was heavy but she said it was nothing. I was impressed!

However, she was right. When I got home I found that that bag had been ransacked by a thief. The 3D squares, several boxes of sandpaper, glue brushes, an auxiliary power switch, several catalogs and some other stuff… all gone. Making matters worse was that my credit card receipts were in those bags.

I called Citibank Mastercard and they canceled the card. But it turned out that my Citicard has purchase theft protection so they credited those losses back to my card! It made the day somewhat less ugly.

Post-Post Mortem: my missing stuff was found! I just got a call from John. It was in his car all along. Joyce had broken my stuff out into two blue bags and one of them had fallen between the seats in his Excursion or something. My faith in humanity just went back up a millimeter.