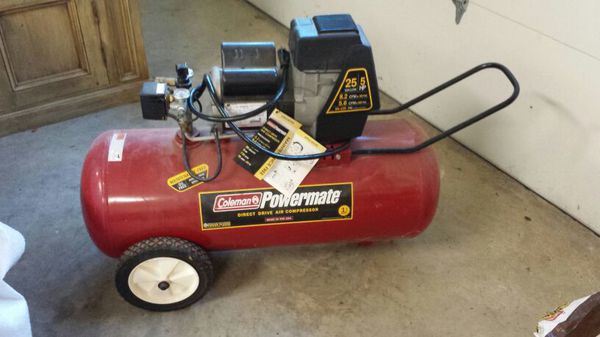 This was the first Labor Day weekend since I got this place that I wasn’t knee deep in some h/i project. Last year I was in the middle of the guest room renovation. Now, I’m waiting for lumber estimates so I can start on the master bedroom rehab. I took the opportunity to hack on my Drupal software but, man, does it need a coherent manual.

We got some of Ernesto on Friday/Saturday. The wind down here on NY Harbor was pretty fierce so there was clean up to do, which is about as clumsy a segue as I can make to my house topic o’ the day: compressors.

I’ve got a 25-gallon compressor. It’s one of my favorite tools in the shop — not just for what it typically does but for some of the oddball uses you can put it to, like drying off a washed car and blowing out the shop after a sanding marathon. It can even take out a mosquito at ten feet. Today it was my broom.

I bought a cheap pressure gun wand from Harbor Freight a few years ago and use that to sweep off my stoop and sidewalk. Unlike a broom, it reaches into corners and under parked cars. It’s also excellent for blowing dead leaves out of a flower bed.

While I was waiting, and waiting, to close on this house I had some pretty whacky things I wanted to build into the place. One was a permanent compressor port on each floor. The other was a whole house beer tap. Suffice to say, I didn’t do either one but I really regret not running the copper for that compressor when I had the walls open. It would have saved me several trips over the hundred-foot compressor hose snaking its way two stories up from the basement.

The most bizarre compressor application I’ve heard of has to be an urban legend. On the other hand, when I read that 40% of Americans reject the scientific basis of human evolution I’ve gotta think there’s someone out there dumb enough to try it.

A guy needed a braising torch to work on his car. He couldn’t afford one so he had a brilliant idea. He hauled his compressor into the kitchen and jury-rigged a fitting from the compressor’s air inlet to the natural gas outlet. Then he filled the 20-gallon tank with gas, readied his homemade torch, flipped the switch and… you can figure out how this story ended.

On that note, the This Old House web site has a cool pictorial series called Home Inspection Nightmares. Check it out. A light switch in the shower??

Several years ago, a home inspector on the Harley Davidson Usenet newsgroup, rec.motorcycles.harley, sent me a photo of something he said he had encountered. A home owner wanted to be able to listen to music while laying on a raft in his swimming pool. To power his ghetto blaster, he made a floating electrical outlet from an old dishwashing detergent bottle, a duplex outlet and lots of masking tape. In his defense, he used a GFCI outlet. I’ve gotta find where I archived that picture.

I go up to Nantucket four or five times a year to work on a friend’s house and scarf cohog chowda’ till I leave a butter slick. At the local Buildings Dept they have a Wall of Shame containing pictures of violations that the inspectors have encountered. Some of them are priceless. Why someone whose house is sitting on raw land worth seven figures would want to cut corners like these, I can’t fathom. Like the guy who used a vaccuum cleaner hose to tie his washing machine’s drain to the main stack.

Then there’s the current winner of the annual Darwin Awards:
(2006, Adelaide, Australia)
In the suburbs of Adelaide, “the undisputed cannabis capital of Australia”, sleeping
residents were awakened by a resounding explosion. A smoking hole was found in a
neighbor’s backyard, still reeking of the pungent odor of marijuana.
Police found the remains of a man at the bottom of the hole.

They learned that the deceased had setup a hidden hydroponic system in a large
water tank buried in his backyard. He used a CO2 generator — a small flame
from a butane gas bottle — to improve plant growth. On this particular evening,
the man had climbed down into his garden paradise, only to find that the flame
had gone out. Without knowing how many days the gas had been leaking into his,
er, bomb, he re-lit the flame.
And… done.